Who Will Be "In" on "Project Runway"? 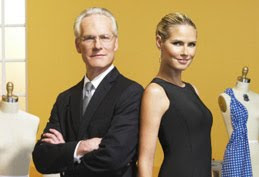 When "Project Runway" made the long-anticipated move from Bravo to Lifetime this season we were nervous. We worried that the network most famous for melodramatic movies of the week and the D-List train wreck "Tori and Dean: Home Sweet Hollywood" would ruin one of our favorite reality TV shows.

Turns out we could breathe easy. Not only was "Project Runway" as good as we remembered it to be, but Lifetime also upped the ante by adding a new show to our TV watching slate: "Models of the Runway."


As Heidi Klum reminds us every week, "Models, this is a competition for you, as well; the model paired with the winner of 'Project Runway' will receive a fashion spread in Marie Claire magazine and $25,000 from L'Oreal Paris Skin Genesis." Sure, we knew that, but while we can name most of the "PR" winners of the past (even the less inspiring ones, such as Chloe Dao and Leanne Marshall), we couldn't tell you the name of a single model who competed before, let alone the winners. Not so this year. We watched our favorites — Kojii Helnwein and Matar Cohen — walk off the runway for good. And we're waiting with as much anticipation to see which model will win as we are to see which designer will win. We feel for these tall and lanky finalists because, frankly, winning or losing is totally out of their hands. They can walk a great walk, but if their designers' clothes don't cut it, they're out.

So as always, the real question is which designer will be in and which two will be out. This season, for the first time, the finalists are all women. The clear frontrunner has been Irina Shabayeva, but experience tells us that this doesn't always mean much. Even though her designs are sophisticated and classic, she doesn't hold a candle to past ultra-creative winners, like Jay McCarroll, Jeffrey Sebelia, and Christian Siriano. She really can't even compare to such past losers as Austin Scarlett and Santino Rice when it comes to originality. But in terms of this season's competition, she's the best.

Carol Hannah Whitfield seems to simply regurgitate Season 3's designs by Uli Herzner. We can't believe she keeps twisting and braiding straps and pitching it as fashion-forward thinking. Not to mention the fact that in the last episode (just the night before the runway show), she was praying to the porcelain god — not the god of fashion.

Althea Harper doesn't do a whole lot more for us, especially considering that the best piece we've seen from her collection so far once again rips off Irina's slouchy collared cozy sweater.

If we had our way, Heidi would say auf Wiedersehen to all three of them, and they'd bring Epperson back as a surprise finalist. He didn't win any challenges, but at least he had a unique point of view.

Regardless of who wins, we just hope they use the Macy's accessory wall thoughtfully. Tim Gunn would want it that way.

Written by Amy & Nancy Harrington
Originally for Sodahead.com
Posted by Pop Culture Passionistas at 10:25 AM