So We Know We Can't Dance... But We Love to Watch 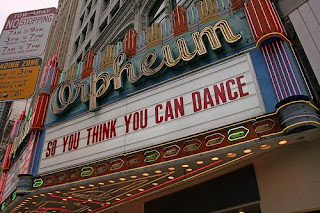 Dance has always been a big part of our lives... not doing it, but watching it. We're a little uncoordinated, but our sister is an amazing dancer. She's a tapper. So we spent our youth going to many, many recitals. We did participate in one. When we were five, we took classes for a year, culminating in an awe-inspiring rendition of "Pony Boy," complete with shiny streamer tails. We quickly realized that our sister is the hoofer in the family, and we are excellent spectators.

We were also brought up watching a lot of other dancers besides our big sis. Fred Astaire and Gene Kelly movies played constantly. Every year our grandmother would take us to the Boston Ballet's world-renowned "Nutcracker." And we even had the honor of going to see Rudolf Nureyev (the Mick Jagger of the tights-and-tutu set) perform in "Giselle" — the first time we realized that dance could be truly sexy.


So, obviously we're thrilled with the glut of dance shows on TV these days, including "Dancing with the Stars," "Dance Your Ass Off," and "America's Best Dance Crew." But our favorite is "So You Think You Can Dance." We love that the show has popularized an art form that, until recently, has been vastly ignored, and has exposed all styles of dance to mass audiences.

We're excited to learn about new choreographers and inspired when some kid from the urban streets without a day of formal training shows up week after week and blows the doors off the ones who've been studying since they were three. It proves that dancing is all about heart and soul.

And we were particularly happy that for the first time in "SYTYCD" history, three tappers made it to the final 20. Unfortunately, although they were great at shuffling and rhythmic timing, they weren't up to par in jazz, samba, hip-hop, and contemporary, and they've all been eliminated already.

So, with the tap dancers gone, we're rooting for Krumper Russell Ferguson to go all the way. The dude is Fred Astaire with dreads. For a street dancer with very little formal training, he knocks our socks off every week. Plus, he has a dazzling smile that helps distract from any mistakes he might be making with his feet. And if the talent and charisma weren't enough, by all accounts Russell is an amazingly sweet, spiritual guy, who wants to inspire and help others. As a senior at the Boston Arts Academy, he organized the Beantown K.R.U.M.P. House, a week of intensive street-dance training for inner-city kids. The goal was to help them "find alternative ways to handle negative emotions through artistic workshops, exposure to the arts, and instruction in Krumping."

We think people used to underestimate the power of dance and the arts, hence the non-existence of arts in schools nowadays, but we're inspired that "SYTYCD" is doing something to change that. Dance on!

Written by Amy & Nancy Harrington
Originally for Sodahead.com
Posted by Pop Culture Passionistas at 1:00 AM