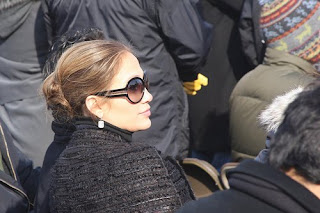 
It certainly seems that Jennifer Lopez has traded up from marriage to marriage. Current hubby and baby daddy, Marc Anthony, seems to be a stable force in her usually tumultuous love life. Chris Judd, who preceded Anthony, was a sweet guy who just didn't seem to be her celebrity equal. But that first Mr. J-Lo, Ojani Noa, who seems to have been looking for ways to cash in on his former wife's fame for years. He's not going to make cash when he submits their 1997 honeymoon sex tape into evidence in court next week. But the move will make the footage public and certainly boost his otherwise not so high profile.

Will the almost 13-year-old sex tapes have a negative impact on Jennifer's career? Probably not. Lots of celebrities have been exposed in sex tapes before, and most of them (sorry, Dustin Diamond, we don't mean you) are doing just fine.

Let's start by saying that no one has sex in the Eric Dane and Rebecca Gayheart sex tape. But you still see a lot of skin during their bedroom-and-hot-tub romp, as the couple spends the video parading around naked with former Miss U.S. Teen Kari Ann Peniche.

Kim Kardashian is basically famous for her 2007 sex tape with singer Ray J., her then-boyfriend. Kim immediately filed suit against Vivid Entertainment to keep the tape from being circulated. She eventually settled out of court, getting a reported $5 million and a reality TV career out of the deal. have with your partner BEFORE shooting a sex tape, for sure. Regardless, they reached a settlement on Easter Sunday, of all days. And with that, Colin successfully blocked the tape from distribution.

Emerging young film actor and Brat Pack leader Rob Lowe starred in several films in 1988: "Masquerade," "Illegally Yours," and a highly scandalous sex tape. The video contained two parts. The first showed Lowe at a hotel during the Democratic Convention with two young females, one who turned out to be just sixteen. The second half of the tape caught the actor in a Paris hotel with both a young model and a future producer, Justin Moritt. The second threesome has the distinction of being the first commercially distributed celebrity sex tape, and boy, did Rob's image take a dive. But after sex addiction rehab, and a few good film and TV choices in the subsequent years, Lowe's career and reputation were back on track — that is until the whole nanny scandal, but that's a different blog for another time.

What better way for a couple who got married after knowing each other for 96 hours to spend their honeymoon than filming their sexual exploits? Definitely not something to pass on to the grandkids. But Pamela Anderson and Tommy Lee became one of Hollywood's first Internet sex tape sensations when their romantic getaway was released on the Web for all to see (seriously, it seems like practically everyone has watched this thing). It looked like the tape was going to outlast their love when Pam and Tommy split in 1998, yet a recent night out at the Hard Rock Hotel in Las Vegas left some wondering if the couple might be planning a second honeymoon sometime soon. Hopefully, they'll leave the video camera at home this time.

As much as she seemed to want to be famous, the world did not yet know who Paris Hilton was in 2003. But when "One Night in Paris," the personal sex tape she made with then-boyfriend Rick Salomon came out on video, Hilton became notorious. The socialite spun the scandal into a major career move and is now a reality TV star, singer, model, fashion designer, author, and slightly more legitimate video star. That is, if you consider "The Hottie and the Nottie" more legitimate entertainment than "One Night in Paris." And Salomon? He went on to a ten-week marriage to another former sex-tape queen: Pamela Anderson.

Sometimes the scandal just seems inevitable. Such was the case, in 2006, when a tape of Irish bad-boy actor Colin Farrell and his Playboy playmate ex-girlfriend Nicole Narain surfaced. And in typical "who-leaked-this" sex tape fashion, Narain denied that she leaked the 14-minute video, and Colin Farrell sued her (and her accused co-conspirator and friend, Candace Smith) over the tape's release. Colin said he was aware of the video being made but that he and Nicole had agreed to keep it to themselves. An important conversation to have with your partner BEFORE shooting a sex tape, for sure. Regardless, they reached a settlement on Easter Sunday, of all days. And with that, Colin successfully blocked the tape from distribution.

We wouldn't expect Kid Rock and Scott Stapp from Creed to be buddies. But back in 1999, the two got, shall we say, intimate with a couple of groupies while on the road. When the tape finally surfaced six years later, Christian rocker Stapp said it was leaked by someone trying to ruin his solo career. Rock said that Stapp put it out to BOOST his solo career. But luckily for all, both a female participant and Stapp blocked the distribution, and the footage was never released. Amen.

If ever there was a sex tape that would turn anyone off from sex tapes, it's got to be Dustin Diamond's 2007 romp. Yes, that Dustin Diamond — Screech from "Saved by the Bell" — in a bubble bath with two co-eds. Are you cringing yet? In fact, we think it should be used as a Sex Addicts Anonymous treatment tape. Strap them down with their eyes pried open, a la "A Clockwork Orange," and make them watch Screech repeatedly. That would cure anyone of an addiction. Just a thought.

Eight months after figure skater Tonya Harding's ex-husband Jeff Gillooly arranged to have her competitor Nancy Kerrigan attacked with a lead pipe to the knee cap (remember..."Why me?"), Gillooly sold a sex tape to a tabloid show and the stills to Penthouse. And the star of the sex tape? You guessed it: little miss triple axle herself. It was Tonya and Jeff's wedding night video from 1991. Their vows earlier that day must have gone something like: through richer and poorer, in sickness and in health, in scandal and probation, as long as we both shall stay out of jail.

If Sergeant Schultz knew what Colonel Hogan was up to in his spare time (and we're not talking about him sneaking out of the camp), he probably would have just said, "I see noth-ink." Off-camera, actor Bob Crane had a dirty little secret. He and his friend John Henry Carpenter (who worked for Sony Electronics) had a hobby of making sex tapes with random girls. But something went terribly wrong when, in 1978, Crane was found bludgeoned to death. While Carpenter was the prime suspect (a missing tripod was believed to be the murder weapon), he was never convicted of the crime.

In 2005 a video of Fred Durst, frontman of rock band Limp Bizkit, was leaked on the Internet. We'll pause here while you insert your own Limp (Bizkit) sex joke. Apparently, a computer repair dude stumbled upon the footage and sold it. Some reports say Durst allegedly sued several Internet sites for $70 million, while others say he leaked the tapes himself to get some publicity for a failing career. How'd that work out for you, Fred?

Was it just coincidence that the news of Verne Troyer's sex tape with now ex-girlfriend Ranae Shrider hit the Web smack dab in the middle of his press junket for "The Love Guru"? The 50-minute video was leaked by TMZ, and Mini-Me sued for invasion of privacy. It was rumored that he demanded "the sum of one million dollars," with pinkie finger implanted firmly in his mouth.

Posted by Pop Culture Passionistas at 10:20 AM