Bob Newhart Is Still Funny After all These Years 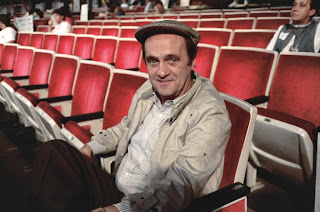 Photo by Alan Light
http://www.flickr.com/photos/alan-light/ / CC BY 2.0
Last weekend, the Los Angeles hipster film afficianados at the American Cinematheque made one of our childhood dreams come true. We were in a room with Bob Newhart, when the Aero Theater ran back-to-back Newhart films (“Cold Turkey” and “Hot Millions”) and invited the legendary comedian to speak between the two flicks.

The room was packed and it wasn’t just TV fans that came out to see Newhart speak. Among the luminaries in the audience were Bob Schiller (writer on sitcoms like “I Love Lucy” and “All in the Family”), John Voldstad (that’s Larry’s “other brother” Darryl to you “Newhart” fans), and most amazing of all, Norman Lear, who directed “Cold Turkey” and joined Bob onstage during the Q&A before leaving early to drop his young daughters’ friends off at home.

Newhart did not disappoint. He was exactly as we had always expected – a charismatic guy who seems grateful for the life he’s had.  The former accountant turned copywriter in the late ‘50s. He happened to start recording funny phone calls with a coworker at a Chicago ad agency and turned that bit into a record called "The Button-Down Mind of Bob Newhart,” which would become the only comedy album to ever win a Grammy for Album of the Year.

Bob beat out two classical pieces (the Brahams Concert No. 2 by Sviatoslav Richter and the Puccini Opera “Turnandot” performed by Erich Leinsdorf) and three of the biggest recording artists of the day: Harry Belfonte, Nat King Cole, and Frank Sinatra. According to Bob, Old Blue Eyes wasn’t amused. He recalled, “Frank was not thrilled with the fact that a comedian had beaten him out for album of the year. But didn’t take too much to upset Frank. Wind… or a bird.”

The highlight of the night with Newhart came with an audience member started his question with an enthusiastic, “Hi Bob,” which set the crowd into a fit of wild applause. When Lear looked confused, the star of “The Bob Newhart Show” launched into a full-scale explanation of the drinking game his show’s incessant salutations had inspired.

For a guy who thought he was going to be in the business “for five [years] out.” Newhart seemed surprised that he’s had a 50-year career. In fact, he still does about 20 stand-up gigs a year, but that’s his max. “I say the alternative is ‘Sunset Boulevard.’ Sitting in a darkened room and Erich Von Stroheim says, ‘Which episodes of ‘The Bob Newhart Show’ would you like to watch next?’ Not my idea of retirement.”

We can only hope Bob won’t retire any time soon.
Posted by Pop Culture Passionistas at 9:01 AM