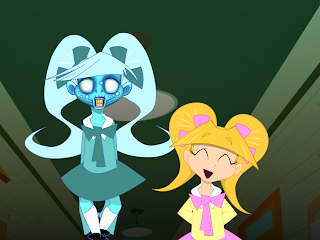 You loved her on Charmed

. Now prepare to simultaneously love and hate her on the new web series Mari-Kari.


In the  new FEARnet.com animated series, Mari-Kari, Shannen plays the dual roles of identical twin sisters, Mari and Kari. Mari is a sweet, lovable, naive 7-year-old who's optimistic outlook gets on the nerves of her classmates. Kari is a sadistic, sarcastic, down right mean, and pretty psycho little girl. Oh, and she's also dead. When her ghost comes around to protect her adorable sister from all the bullies comedy (and tragedy) ensues.

The series launched yesterday and the site will post two new episodes each week through the end of June. We spoke with Shannen recently about being a web newbie and the dual role.

PASSIONISTAS: How did you get involved in the web series?

SHANNEN: The guys at Liquid Theory called up and sent it to me and asked me if I'd be interested. And I read it and I thought it was funny. I thought it was dark. I thought it was a little tongue in cheek. And then when they said that they wanted me to do both voices I thought, "Wow, this is a cool opportunity to create two different characters and get to play both at the same time." Also, the web was a huge appeal for me because I'm brand new to it.

PASSIONISTAS: What about the web is so appealing?

SHANNEN: I think what's appealing about the web is the fact that you can put so much content out. And that you don't have to go the traditional route of doing a presentation or doing a pilot and then sitting around and praying and hoping that a network picks it up. I think that it's so hard to get a show picked up on a network and maybe they don't give you that much time to build an audience. And shows cost so much money. This is something that doesn't cost nearly as much money and yet it's providing jobs for a ton of people including myself and I think your audience is different and possibly broader. I don't know because I don't know that much about the web yet. I'm a newbie and I'm learning but I just think that it's whole new medium out there and anything that's new and gets that much attention, I think you have to explore.

PASSIONISTAS: Is there a certain freedom to doing a two minute episode of something as opposed to a long form piece, or is it more difficult?

SHANNEN: No. I don't think so. Freedom... I think as an actor you have so much freedom anyway because you're the one creating the character and bringing it to life with the help of your fellow actors and your director and your producers. But that's artistic freedom at its best. At least for me it is. I'm my happiest when I'm on a set. I'm my happiest when I'm creating a character and for me going in there and doing a voice over is just as much dedication, just as much work, and often just as much fun and as fulfilling as being on camera. They take the same amount of dedication. You have to be committed to those characters either way.

PASSIONISTAS: How did you go about creating the two different characters?

SHANNEN: I just approached it with a very open mind and really listened to the director and what he wanted. And knowing that they needed to be very different. Kari's mind set, she's a very, very, dark, dark, dark, dark messed up girl. And Mari is the eternal optimist. This is a girl who believes in the good in everyone and refuses to actually see the truth. And everything is rainbows and butterflies and ice cream — which is bizarre to me, as well. Both characters were drastically different and odd to play, but an absolute blast to play at the same time.
Posted by Pop Culture Passionistas at 2:00 PM