An Interview with Who Wants to Be a Millionaire's Meredith Vieira 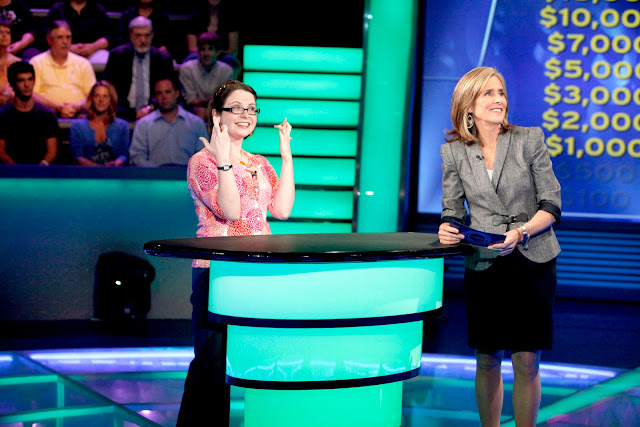 Who Wants to Be a Millionaire returns for Season 9 on Monday night, September 13th, but don’t expect the same old predictable game show where no one walks away a winner. In eight seasons only three millionaires have emerged from the series. But there are changes afoot, that may—or may not—increase the odds.

First of all, the "hot seat" is gone. Host Meredith Vieira and the contestant will stand. Sounds like a minor, cosmetic thing, no? But this one small switch takes away a comfort level and creates a whole new dynamic between host and wanna-be millionaire. In a recent interview Vieira claimed, "We thought it would be fun to get rid of it so that contestants will have to think on their feet literally. It's also freed them up to move around a bit... And I think that they like the ability to walk the room a little bit."

When asked how she interacts with nervous contestants, she replied, "I'm the touchy-feely type. I'll hug them obviously. In every commercial break I'm talking to them to try to relax them as much as possible. It's a weird role that I play because I'm trying to trick them a little bit and mess with them. But I never want them to feel out of sorts… I want them to win, all of them. But I do have to mess with them a little bit."

Next in the list of changes to the show—the first questions no longer pay out low dollar amounts and pose simple throw away trivia. The amounts and difficulty of the first ten questions have been randomized. A contestant can't just rest on his laurels until question number six. And what's more, it makes for a lot of second-guessing wondering whether the question is actually easy or just seems easy. In addition, money accumulated is added to the player's bank and they can walk when they want (losing half of their earnings if they do so.)

Vieira explained, "What we've done is, we've randomized the order of the questions and the dollar amounts. So in other words the first question up could be the easiest question like it used to be, but it might me worth $25,000. The dollar amounts go from $100 to $25,000. So it might have the easiest question with the most money attached to it or the hardest question with the least money attached to it… Not only is it making the game more interesting, but it's also creating… more risk takers now because of that."

As for the final change, some of the lifelines have been eliminated, but a new one, Jump the Question, has been added. It allows contestants to skip two questions during the course of the game. Of the old lifelines, only Ask the Audience remains.

We asked Vieira if she could use any Millionaire lifeline (past or present) in real life, which she would choose. She responded, "Probably Phone a Friend because my life being the way it is, I don't get to communicate with my friends as much as I'd like to, to begin with. So, I think if I had that lifeline, I'd use it constantly and your friends are the people that you trust the most. So, I would definitely use that lifeline. Because they don't have it now, my second choice would be Ask the Audience because they get it right the majority of the time."

Vieira was slow to embrace the shake-up, unsure of how the audience would react. She revealed, "I was not totally sold on these changes when I was told about them. And then I saw the game played, a mock version. And I have to admit that I thought it was more exciting. And now, having hosted it for ten shows, I definitely think it's an improvement."

So does this mean there will be more winners—or at the very least more optimism that the game can be won? Vieira commented, "I think so. And also they're winning a lot of money right away and potentially they get some of those big numbers since they accumulate the money and it's all put into a bank. I think that makes them feel more invested in the game and more excited about it so... I think it gives them the sense that they can move up that tree more quickly than they might otherwise."

She continued, "So have we had a millionaire? Well, I can't say. But we've only had three, in the eight years, that have got it. And I'm sure hoping that we have at least one this year. It would be great."

We also couldn’t resist asking Vieira which of her Today Show co-hosts would do best at Millionaire. Her answer? "I think it would be Roker, Al Roker. I think he's got an amazing amount of trivia in his brain. He pulls stuff out of his head constantly. We're all in amazement… I think they'd all do well, but I think Al would do extremely well."

Tune in to Who Wants to be a Millionaire Monday night, September 13. Check local listings for time.
Posted by Pop Culture Passionistas at 2:00 AM