This is Not the Version of Star Wars We're Looking For 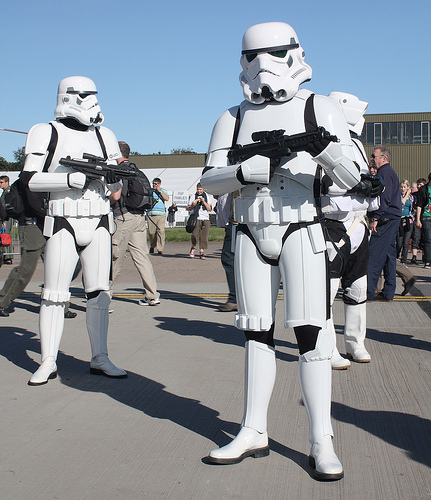 
When we were little, our big brother took us to the dark, cool General Cinemas movie theater to see the first movie that would change our lives—Star Wars

. No, we’re not going to call it A New Hope or Episode IV. This movie was, is, and always will be simply Star Wars to us.

Now a week earlier, our brother had rushed home from seeing the movie with a copy of a promo newspaper. We can still picture the image of the hooded Jawa on the front page. “What is that?” we asked. We were hooked.

His enthusiasm did not wane for the next seven days and he convinced our mother to let him take us that next Saturday, even though we were a little bit too young. We were enraptured. And, during the final battle at the Death Star, we can honestly say we did not breath once—pressed against the wall in the fully packed movie theater. Our lives would change forever, and we’d even dedicate a bit of our time to creating visual effects for TV and movies, but that’s another blog for another time.

Our point is this, that film, in all its now dated glory, was perfect as is. We’ve never bought into digitally remastered versions. We’re okay seeing a matte line or two. This was the granddaddy of all effects movies to come and even its imperfections should be admired by all the CG artists who owe an industry to their craftsmanship.

And so, we’re awaiting the release of the newly announced 3D version of one of our favorite films with great trepidation. We get it. It sounds cool to zip through the Death Star’s trenches in an enhanced reality. But it seems, well… forced.

, they better be ready for a real rebellion.
Posted by Pop Culture Passionistas at 2:00 PM