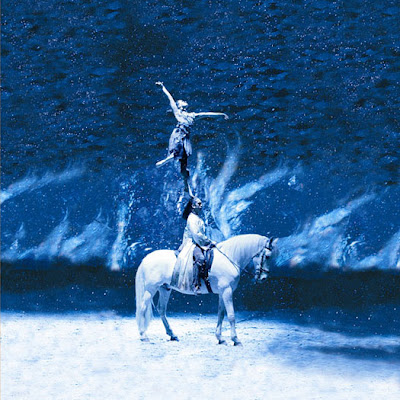 If you’re running those last minute Christmas errands near the IKEA in Burbank, California, you’ll see a new structure in the skyline. No that giant white tent isn’t a Christmas tree lot on steroids. It is soon to be the home of the biggest touring show in the world, “Cavalia.”

At a recent rain-soaked press conference to commemorate the tent raising, the “Cirque du Soleil”-on-horseback fantasy’s creator Normand Latourelle explained just how a big a structure they’re erecting. “If you can envision a circus tent usually the middle part of the tent is the highest point. And here the lowest point is the middle because this is like four tents connected together… The tent peak is at 100 feet and we'll be welcoming 2,000 guests.”

A very big top for an enormous show. “Cavalia” employs over 100 people on a permanent basis and supplements their crews with 200 local hires. The cast features over 40 artists, acrobats, dancers, musicians and riders from around the world. Forty-five horses from 12 different breeds make the scene each night. French-Canadian artistic director Latourelle explained why so many types of horses were incorporated in the production, “Human[s] for the last couple of million year[s] have transformed the horse. So they have created different breed[s] for different purpose. So because in this show you get to see a lot of horse riding technique... You get to see bare back riding, trick riding, you get to see a lot of liberty, you get to see jumping... so we have different breed[s] for different purpose.”

One consistent factor with all the horses — there isn’t a girl among them. Latourelle continued, “All the horses we have are males and half of them are stallions... You understand with so many stallions we don't have mares. No[t] one. It's like a monastery. We keep them quiet.”

This isn’t a case of sexual discrimination, the males, he told us, just happen to give him the type of performance he’s looking for. “We like the stallions because they are more animated. They are very proud animal[s]. They are always in playful mode... Because half of the show the horse are totally free on stage, we like them to express themselves. Sometimes they disobey and I like that. This is the moment I prefer. When they're stubborn and say, 'No, I'm not doing that.' And that's a way for me to welcome the nature on stage because this show is a lot about nature.”

But “Cavalia” is also about heart. And that is why they have partnered with the Larry King Cardiac Foundation for a special event on January 20, 2011. Proceeds from ticket sales that night will go to the now-former CNN host’s charity. Larry King, Jr. was on hand at the tent raising to carry forth the organization’s mission, “My father started the Larry King Cardiac Foundation 23 years ago... He had quintuple bypass surgery and he's still doing great at 77. And what the foundation does is for people who do not have health insurance or don't have the money to pay for cardiac care that's what we do. We fund individual patient surgeries so the money.”

That’s why Latourelle feels “Cavalia” is the perfect fit for the foundation. He remarked, “’Cavalia’ is about love... and when you witness the show you see love between the people because that's the message I like to carry around. It's a love message... And it's also a love affair between the people and the horses. And love it's all about the heart from my point of view. And without the heart you don't get love. And the cardiac foundation is there to support the real heart.”

Unfortunately Larry King couldn’t make the tent raising last week. The event took place the morning after his final CNN show aired. And as King, Jr. addressed the crowd on the rainy Burbank morning, he said, “I think the heavens are crying today for my dad not being on CNN anymore. But we did have a great time last night with him. Sorry he couldn't be here but the Governor announced that today's Larry King day in Los Angeles so he had to do that and couldn't make this one.”

Larry Sr. will make it to the big top on the 20th. His son clarified, “My father will be here. He will not go on a horse. I don't think he's gonna do that. He did that once with Ted Turner for about a minute and a half and that was it. But he will be part of the event and my brothers and his wife, everybody will be here.”

That’s okay. A local luminary was more than happy to throw her hat in the ring. Governor Anja Reinke chimed in, “Unlike Larry King, I will go on a horse.” That sounds like a show not to be missed.

“Cavalia” opens on January 19, 2011 at 777 North Front Street in Burbank, California. Ticket prices range from $69 to $139 for regular seats. Customized packages including a tour of the “Cavalia” stables or a cocktail dinner reception before the show range from $159 to $219 per person. For additional information or to purchase tickets visit the “Cavalia” website or call 1-866-999-8111.