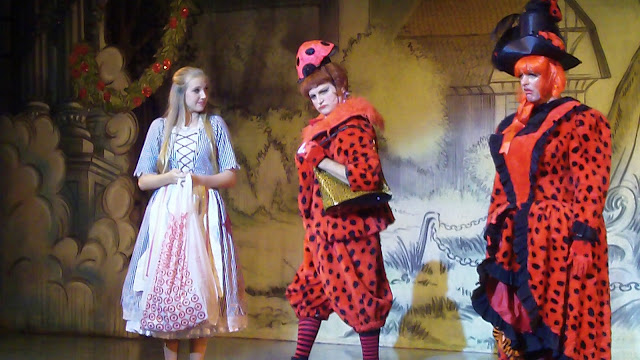 We are not what you would call fans of audience participation. In fact when we hear the words we usually run in the other direction. But there's something about the Lythgoe Family Productions' version of Cinderella that had us cheering from our seats and calling out "Hello But'ons" whenever Benny Harris took to the stage. The musical extravaganza, now playing at the El Portal Theatre, is a British Panto version of the classic children's story.

The star-studded fare is produced by So You Think You Can Dance's Nigel Lythgoe, along with his wife Bonnie (the director) and son Kris (the playwright). The choreography comes courtesy of Dancing With the Star's Mark Ballas.

Headlining the cast is Jerry Mathers (of Leave it to Beaver

fame) as Cinderella's father Baron Hardup, who lost all his money to Bernie Madoff. Freddie Stroma, who played Cormac McLaggen in the two most recent Harry Potter

Sixteen-year-old Veronica Dunne won the part of Cinderella in a competition that took place at local Westfield shopping malls. The contest was judged by American Idol's Kara DioGuardi, SYTYCD's Mary Murphy and How I Met Your Mother's Neil Patrick Harris.

Rounding out the cast are Benny Harris as Ella's best friend Buttons along with Eddie Driscoll and Mark Edgar Stephens who perform in drag as the evil stepsisters, Cowel and Seecrest.

As you can perhaps decipher from the characters alone, the show is chock full of pop culture nods just the way we like 'em. The British Panto style incorporates current references, contemporary music and broad (oftentimes double entendre heavy) humor into a classic fairy tale that both children and adults can enjoy.

And true to the Panto tradition, crowds are encouraged to cheer for Cinderella and alert Buttons to the stepsisters' sinister ways. We couldn't help but get caught up in booing Cowel and Seecrest each time they entered (to the American Idol theme, no less). And how could we not hum along just a little when The Beaver came onstage. He also has his own entrance music... any guesses what it is? Hint: It's from a classic '60s sitcom.

We admit we were initially drawn to the show to see Mathers all grown up — and he did not disappoint — but we were truly enthralled by the enchanting and witty production. Dunne displays an extraordinary amount of grace and a strong presence for such a young rising star. Stroma has the looks and the chops to be the next Hollywood heartthrob — watch out for him. Warren belts out songs like "When You Believe" and "Over the Rainbow" with a refreshing ease. The charming Harris uses his improv skills from Chicago's Second City to warmly interact with the audience throughout the show. And Driscoll and Stephens as Cowel and Seecrest were delightfully evil and lovable all at the same time.

If you're a kid growing up in Britain, going to Panto during the holidays is as common as an American going to see the Nutcracker. But this production of Cinderella marks the first time the genre has been produced in the U.S. The Lythgoes hope to make it an annual event. If the Fairy Godmother and all the kids in the audience say "Bibidi Bobidi Boo" enough they may just get their Christmas wish.

Check back next week to see our interviews with the cast of Cinderella. And for a different way to celebrate the holidays with the whole family, don't miss it. The show runs through December 19 at the El Portal Theatre, 5269 Lankershim Blvd., North Hollywood, CA. For tickets and information visit their website or call 866-811-4111.

To see a slideshow from this production of Cinderella, visit Examiner.com.