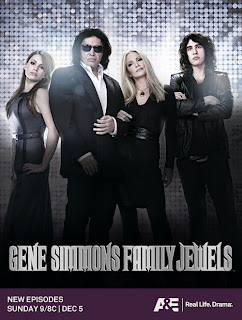 A rock star shares his family's tragic history, a child star gives back and a TV network stands up against discrimination. Here are this week's most inspirational pop culture moments.

Gene Simmons Share His History on the Family Jewels

But when we saw a preview of this Sunday night’s brand new episode, crying is exactly what we did — and lots of it. We had thought that Simmons was a quintessential pop culture open book. After all he hasn’t been shy about tooting his own horn when it comes to his rock godliness, his romantic prowess or his business savvy. Gene never hid the fact that his mother, Florence Klein, was a Holocaust survivor. But he has been very protective of the details surrounding her journey. Until this Sunday’s episode of Family Jewels at least.

The show unfolds during a European KISS tour. While in Amsterdam, Simmons gets a guided tour of the city from a local boy. Not only is young Stephen a KISS fan, he and Gene share a common bond — they both have ancestors who are Holocaust survivors.

When Steven takes Gene to the Anne Frank House, and Simmons faces some very deeply personal facts that he had never confronted before. Most poignant among them – that Florence was almost exactly the same age as 13-year-old Anne Frank when she was taken to a concentration camp.

But perhaps Gene’s long-time partner Shannon Tweed summed it up best, “For the kids out there who are watching the show, know that your dad who snores on the couch while he's watching TV and your mom who seems to only cook and drive you to school and do nothing else and their parents, who just seem like tottering old fools have a story.”

This one will strike a chord far beyond the KISS nation for sure. Don’t miss this very special episode of “Gene Simmons Family Jewels” when it airs on Sunday, December 5 at 9:00 p.m. PST/8:00 p.m. Central on A&E.