Danielle Turchiano is a Girl After Our Own Hearts 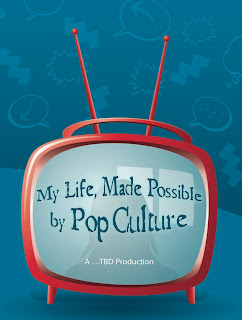 Every once in a while we meet a pop culture kindred spirit. Someone who gets why we think the characters on TV are our real life friends or who is grateful that a childhood spent in front of the tube has actually turned into a career. When we discovered the book My Life, Made Possible By Pop Culture

, we realized we had found one of these people.

Danielle Turchiano spent her formative years rushing home from school to catch her new favorite show. She realized that she got to know these fictional characters as friends and learned some important life lessons from them. And so she decided to put what they taught her into a book to share with the rest of us pop culture junkies.

Her account of her childhood with no siblings, a seven-channel rabbit ear TV and, from the sounds of it, fairly absentee parents, ends up being a cleverly masked coming of age story. She tells of the love lessons she learned from shows like Saved by the Bell

. She revealed, "I literally watch people make mistakes through television and because I feel like I learned a lot through that, it's like you're watching your older sister make the mistake. Yeah, they're in a box in front of you, but if the writing is strong enough that you feel that they're real, that's the mark of a good TV show."

Aside from TV, Danielle writes about all kinds of pop culture including movies and music. But TV is her real passion. We asked her what was special about the small screen and she answered, "It's a unique art form obviously because it's long term. But there are a lot of shows that I get really caught up in the characters. And because I get to see them every week it's like family. I'll say it. I don't care."

Danielle told us there is one overriding message that she got from her years of TV watching, "I think what I learned more than anything... is that you have to understand that everyone is flawed. If you're looking at somebody and putting them on a pedestal... you're going to learn that what you're seeing is not the whole story. It taught me to look at the whole picture."

She added, "Don't just assume that that point of view is the truth and the whole story.... If you think something is too good to be true, it might be. And you have to trust your own instincts."

In addition to her years of being a fan, she has worked behind the camera as well and has covered many shows for various online media outlets and her own blog www.possiblebypopculture.com. Her site features a recurring column so brilliant we wish we had thought of it, Wii with the Stars. She films herself playing videogames (while conducting an interview) with the actors from some of TV's best shows like Nolan Gould from Modern Family, Kristoffer Polaha from Life Unexpected, Darin Brooks from Days of our Lives and Elizabeth De Razzo from Eastbound & Down.

By distracting them with the game, she gets her interviewees to relax and show a different side. She said that it can be difficult to get publicists on board with the idea of bringing their client to her apartment for some digital bowling or tennis, not to mention talking while their guard is down. "It's a different kind of celebrity who's willing to play." And while she said she would not turn down a chance to play Wii with Brad Pitt, her dream opponent is Mark Paul Gosselaar, her school-girl crush from Saved by the Bell. Gosselaar has a new TV show starting soon, so her dream just might become a reality if his publicists are good sports.

In parting we asked Danielle if she could be one TV character who would she choose. Always the reporter she asked, "Is it who I think I am or who I want to be?" She continued, "I think I am [30 Rock's] Liz Lemmon. I don't think that necessarily anybody should want to be Liz Lemmon because she's very, very flawed. But she's working through it and she's going to be better hopefully."

Danielle also admitted to being part Lorelai Gilmore from The Gilmore Girls. She explained that "the way she feels about her family is very similar to the way that I grew up... trying to run away from it, turn my back on it." And she expanded, "The way that she said to Rory, 'I don't want my kid not to be able to say I love you because I can't say I love you.' There was something in that writing that really spoke to me."

As for who she wants to be, the author had two very different characters from both ends of the TV spectrum. She admitted, "I want to be [Showtime's] Dexter Morgan, but that brings up a whole other issue." And if she could pick a reality star, she'd be "one of the judges on Cupcakes Wars, Candice Nelson or any one of them. Gail Simmons from Top Chef. My dream job is to sit around and eat cupcakes all day."

We think Danielle already has a dream job. Getting paid to watch and write about TV —  doesn't get much better than that. For more on Danielle visit her site www.possiblebypopculture.com.