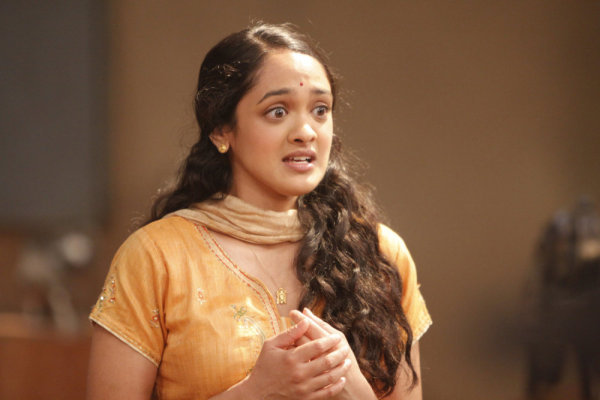 Each year we are saddened when some of our favorite TV shows go off the air and we feel as though we've lost a friend. But as the cycle of TV life goes, new shows come to replace them, introducing us to different characters and bringing us unknown playmates. 2010 was a good year for new friends. Here's our list of our latest favorite TV personalities (real and fake).

10. Madhuri from Outsourced
We admit it. We didn't get Outsourced the first few times we watched it. We thought it was trying a bit too hard and felt a little forced. We also didn't latch on to any of the characters. But over time the show has found its groove and we are starting to relate to the personalities. And we are especially developing a real soft spot for Madhuri (played by Anisha Nagarajan) who is so shy she can't be heard. A trait we can surely relate to.

9. The Girls from Jersey Couture
Over the summer we went to NBC/Universal's Press Day and were introduced to the cast of Jersey Couture. We thought it was just another reality show trying to capitalize on the fascination with New Jersey. And in a way it was. But what we didn't count on was that the mother-daughter-daughter team actually had a lot of heart and soul and just wanted to make people happy. Sure Diane, Kim and Chrissy from Diane & Co. may have slightly different taste in fashion than we do, but in Chrissy's own words, "It might not be beautiful to us. It might not be beautiful to you, but who are we to judge that it's not beautiful for them?"

8. Hayley Taylor from The Fairy Jobmother
In these tough economic times, it makes sense for a reality show centered on helping laid off workers find jobs. And so as all good reality shows do, Lifetime turned to the Brits and found Hayley Taylor.  The Fairy Jobmother travels the country spending a week with various families affected by unemployment. And even though she is blunt and honest with her subject, she's also got a soft tender side. In most episodes Haley sheds a tear along with us when we hear the tragic stories these families are facing.

7. Johnny Weir from Be Good Johnny Weir
Ice skating fans have known the deliciously flamboyant Johnny Weir for years, watching him compete in the Olympics and waiting to see what wild costume he would wear in the rink next. He's had his share of controversy and is thought to be the bad boy of skating. But this year the Sundance Channel took us inside the figure skater's world on Be Good Johnny Weir. We followed the champion around to practices and competitions. We got a glimpse inside his home life and his road to the 2010 Olympics. We love Johnny more than ever before. Now rumors are swirling that he's retiring and going to fashion school. No one asked us, but we think that would make a great season two.

6. Max Burkholder from Parenthood
As big fans of both Lauren Graham and Peter Krause, we were very excited for the season premiere of Parenthood. What we did not expect was that our favorite character would be the young son of Krause's character. In the first episode the family learned that Max Braverman has Asperger's Syndrome and we learned that 13-year-old Max Burkholder is an outstanding actor.

To find out who we chose for numbers one through five visit Yahoo.com.

For related stories check out:
Fairy Jobmother Prizepack Winner Announced
An Interview with the Women of Jersey Couture