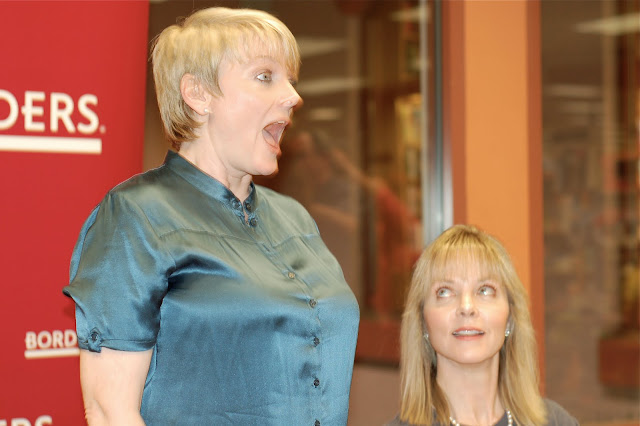 As 2010 comes to an end, we look back and pick our Ten Most Inspirational Pop Culture Moments of the Year. Here's the second half of our selections. To see numbers six through ten check out last week's post.

5. True Blood Stars Support a Local Family
True Blood co-stars and newlyweds, Stephen Moyer and Anna Paquin, wanted to help out a family that was clearly going through a hard time. 47-year-old Kirk Darnell died suddenly, leaving behind a wife and five children — and no life insurance policy. Eight months later, mom Missi and her daughter Genevieve were hit by a car and killed as they walked to a local store. The remaining Darnell children tragically lost both parents and a sister in less than a year. Moyer and Paquin donated items for a silent auction that took place during The Darnell Family Fundraiser in Venice, California on October 10. And they showed up to offer their support in person as well.

4. America's Got Talent Star Tries to Help His Grandmother
America's Got Talent winner, the 30-year-old singer/songwriter Michael Grimm, plays what he calls "Mississippi River Music... New Orleans funk to Memphis soul." At the age of four, Michael was saved from a life living in the Mississippi welfare system by his grandmother. His grandparents home, the one he was raised in, was destroyed by Katrina in 2005. Michael's main reason for wanting to win "AGT" is to have the money to buy his grandmother a proper home. He declared, "I want to get her out of that situation. So no matter what happens here, I'm getting her out of there."
http://www.nbc.com/americas-got-talent/

3. Fighting AIDS through Soccer with Ethan Zohn
After a grueling battle fighting cancer (now in remission) Ethan Zohn, the Survivor: Africa winner, is even more dedicated to combating HIV/AIDS in Africa. Seven years ago the reality show winner took part of his winnings to start Grassroot Soccer, a non-profit company dedicated to educating African youth about AIDS with the help of professional soccer players. In July his work came full-circle at the World Cup in South Africa. This summer Grassroot Soccer teamed up with (RED) to create a youth camp, the Grassroot Soccer (RED) Holiday Skillz Program, giving the children of Africa a safe, healthy, educational place to go while the schools were shut down for the tournament. During the week-long program kids learned about preventing and fighting AIDS, played some soccer, and watched the World Cup in a safe environment. Zohn said the philosophy taught to the kids at GRS "is to find a great support system, to have a positive attitude, to stay healthy, and you can extend your life," a message he adopted in his own recent brave battle with cancer.

2. Ellen DeGeneres Gives $30,000 Scholarship to Teen Banned from Prom
In March The U.S. District Court ruled that a Mississippi school violated the Constitutional rights of student, Constance McMillen, when they banned her from attending the prom wearing a tux and holding hands with her girlfriend. Sadly they were not required to reinstate the event, so the parents threw the kids a substitute dance where all are welcome and many supporters rallied around the teen. One big fan was Ellen DeGeneres, who invited the girl on her show. She told Constance she was an inspiration for standing up for her rights. Ellen said it was up to Constance and her generation to enlighten the world about the fallout of discrimination. DeGeneres gave the student (who has a 3.86 GPA) a $30,000 scholarship check from tonic.com.

1. Alison Arngrim Overcomes Her Own Abuse to Help Others
Most people know her as Nellie Oleson from Little House on the Prairie, but there’s a lot more to Alison Arngrim than meets the eye. In her memoir Confessions of a Prairie Bitch: How I Survived Nellie Oleson and Learned to Love Being Hated

she talked about a childhood of being left at home in the hands of an abusive brother. As with many people in her situation, especially children, Arngrim suffered in silence. Alison learned how to deal with situation by being acting out her aggression and anger through the raging Nellie Olsen.

Now as an activist, Alison works for PROTECT, the National Association to Protect Children. In a recent exclusive interview she spoke to us about what’s next on PROTECT’s agenda, “We've got a bunch of legislation passed... but there is a petition saying to President Obama, to Congress, 'We support the immediate arrest of known predators—people who are known to be committing these crimes right now. And we request that you allocate appropriate funding to these agencies. Could you sling a few dollars towards the cops who are waiting to go arrest these people?' So that's our biggie right now." To lend your support to PROTECT go to their website and sign their Child Rescue Petition.

Posted by Pop Culture Passionistas at 7:00 AM