Rock with You Blends Michael Jackson with a Latin Beat 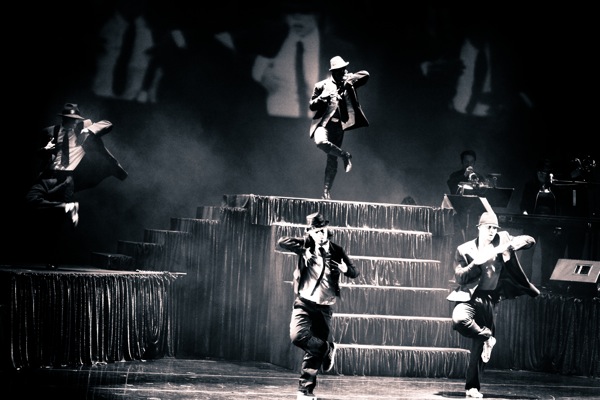 Seaon Stylist Bristol grew up loving Michael Jackson and his music. So when the King of Pop died suddenly in July of 2009, Seaon set out to create a tribute to the star. That celebration of Jackson's music is coming to life in Rock with You at the El Portal Theatre in North Hollywood, California, starting on December 23.

But this is not just another Jackson tribute. This show fuses Michael's music with Latin beats and jazz stylings. The numbers are performed to Salsa, Cha-cha-cha, Merengue and even Latin Hip Hop rhythms. In a recent interview Seaon told us he got the idea while working on a Broadway show after Michael's passing. He recalled, "His death came as the ultimate shock and disbelief to me. I started to think of all the different tribute shows that were happening and they all seemed the same to me. I was working on a Broadway production at the time to fuse Latin and Jazz together, and then the idea hit me. I did not only want to pay him tribute, but I wanted to celebrate his music and his moves. Being of a heavy Latin and jazz influence, I noticed that no one had created a show of this nature, so I set out to make it a reality."

He claimed that in the beginning he wasn't sure if the concept would work. But he said, "[The] musician and singer instinct in me kicked in, and I decided to trust and run with it. After the first two arrangements were completed, I couldn't stop dancing. It's truly addicting. I didn't know what to do to continue making this a reality. All I had was a vision, a dream, the love of Michael and some high-energy Latin rhythms. I figured, run with it, let's see how it flies. And boy, has it flown."

We thought it was unusual that the show was being promoted as a holiday event, but Seaon explained that the cast would be performing some of Michael's favorite Christmas songs that he sang with The Jackson Five. They also have added the Harmonies Girls Choir to join in on a Christmas medley and a "heal the world" medley of songs Michael sang with kids. Seaon commented, "This is a show about fusing cultures and rhythms, about coming together and feeling the joy of our humanity through music and dance. It crosses social, cultural, spiritual, ethnic, economic, language and age barriers. It promotes peace on earth simply by virtue of its existence and the positive energy it radiates. What better time of the year to debut this show? It's the ultimate non-Christmas, Christmas show. It's not only celebrating Michael's music it celebrates life. It's hot and spicy but always wholesome. It's emotionally and physically moving and always uplifting."

Season also said he is proud to present a show that honors his Latin heritage. He remarked, "Even in Los Angeles with our enormous Latino population, there are still, unfortunately, only a limited number of events that embrace the Latin community as an important constituency of the mainstream audience, and even fewer that actually dare to be innovative."

According to Seaon, Grammy nominated Latin musician and composer Rebeca Mauleon wrote most of the musical arrangements for the show. He related, "When we first met it was love at first sight... in the creation department that is. She saw my vision, and being a true MJ fan herself, she was already familiar with the music and fully understood the hybrid we needed between Michael's originality and intricate Latin rhythms. We worked day and night to get every beat and mood right, and I couldn't be prouder of the work we've accomplished together."

Seaon has been a Michael Jackson fan since he was a young boy in South America and his father would send him Michael's records and videos. He remembers the way he and his friends would feel when they would gather around to hear the latest song. He expressed, "This is precisely what I wanted to bring to the stage when I created this show Rock With You. I wanted to show the level of excitement that we felt as kids through his music, but also infuse it with our special Latin roots and culture… His music is infections. It just makes you want to dance and move and sing. And that's precisely what Salsa and most other Latin rhythms do to your soul and your spirit. Now can you imagine the combination? It's incredibly infectious and you just can't sit still."

Seaon thought back to the first time he ever saw Jackson. "I remember the exact moment I first saw MJ perform. Growing up in South America, we were raised really poor, and couldn't afford a television. One of my neighbors, however, did have a television and the kids and I would all stack around their outside window trying to peek in to get a view. Most often they were rather mean to us and would close their windows, but the first time they invited us in to sit down and enjoy a viewing was the most memorable time for me. This is because the first video I ever saw on live television was Michael Jackson's Thriller. How funny is that? The first thing I've ever seen on TV happened to be the biggest project of my life. I don't think that's a coincidence at all. Love it."

Although no members of the Jackson family have been to the show yet, many of Michael's colleagues and dancers have seen it. Season said they are "completely blown away by the originality of the concept. They have personally expressed interest in coming on board and assisting on certain details, since they obviously have had the pleasure of knowing and working with Michael. I accepted, of course, because this adds a unique overtone to the show. In some way I feel like we're getting MJ's approval and that's important... Just to imagine that MJ is smiling down on us, watching us as we celebrate his work the best way we know how — Latin style."

For other theater stories check out:
An Interview with the Cast of Cinderella
he First Jo-el Rocks Bethlehem and Burbank