Hot in Cleveland Meets All My Children 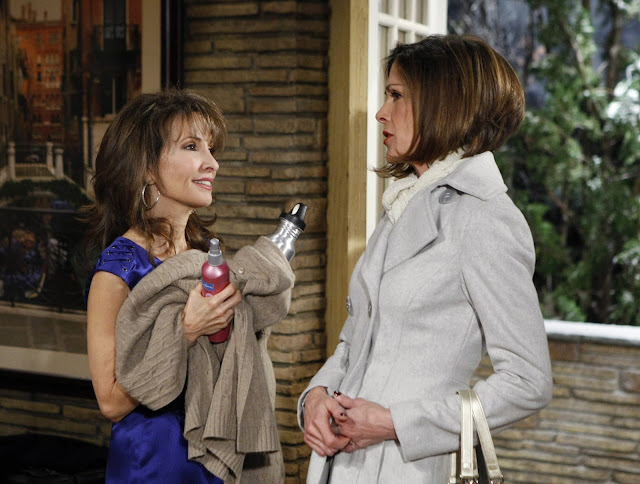 Daytime and prime time TV worlds are colliding tonight for the first of three times this month. In a historic TV crossover event, the runaway TV Land Betty White hit Hot in Cleveland and longtime soap sensation All My Children will share actors.

Tonight Susan Lucci, Michael E. Knight and Darnell Williams will appear on Hot in Cleveland as themselves, the actors on the daytime drama.

For those of you not following the plot of HIC, Wendie Malick's character Victoria is a washed up soap star and Susan Lucci (who plays AMC's Erica Kane) is her arch nemesis. Lucci guest starred on the show last season when she accepted/stole Victoria's Daytime Emmy on her behalf.

This time the HIC gang are going to LA for Victoria's AMC one-day role including an Emmy-worthy death scene. She will Gertie, Erica Kane's housekeeper turned bartender. We hear rumors of a full-on cat fight between the two divas.

ABC President of Daytime TV Brian Frons quipped, "There is only room for one Erica Kane in Pine Valley and Victoria Chase will unfortunately find that out the hard way." He went on to say, "This is a unique opportunity to raise awareness of both shows with similar demos and we expect each other’s viewers to follow from one show to the next.”

TV Land President Larry W. Jones added, “We’re so happy that Victoria Chase will finally get to show All My Children fans why she is a soap superstar.”

The Hot In Cleveland episodes will air on TV Land in two parts, tonight and February 23 at 10 p.m. ET/9 p.m. Central. The All My Children episode airs on February 24 at 1 p.m. ET/noon Central on ABC.

For related stories check out:
Betty White on the Mary Tyler Moore Show Series Finale
How the Days of Our Lives Actors Are Like Their Characters