The Miami Housewives on the Other Wives, Families and Andy Cohen 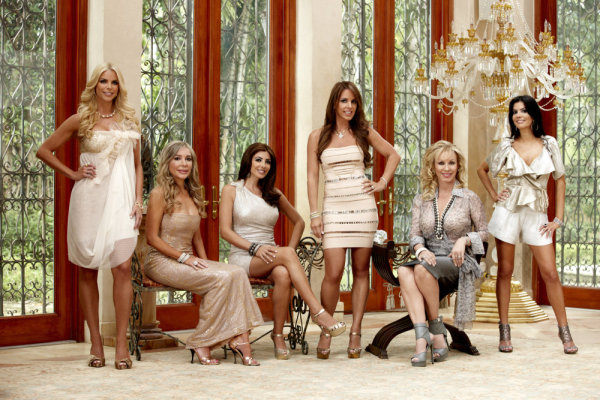 The Real Housewives of Miami starts this week and introduces the rest of the world to the divas of the Sunshine State. According to Lea Black, Alexia Echevarria and Marysol Patton, three of the show's cast members, the women of Miami will be like no other housewives you've seen before. In a recent conference call interview, the stars of the show talked about what sets this series apart from the others in the franchise, how it affects their families and how they feel about their boss Andy Cohen.

This Miami version of the show features six of the most influential and well-connected women in Dade County. Black is married to a high-powered criminal defense attorney and rubs elbows with Obama. Echevarria is the editor of Venue Magazine and publication for the local Latinas. Patton owns a PR firm and comes complete with a boisterous, opinionated "seer" (like a psychic but not really) mother. Their co-stars include Larsa Pippen, who is married to Chicago Bulls star Scottie Pippen, Brazilian bombshell art curator Adriana DeMoura-Sidi and Cristy Rice, ex-wife of NBA basketball player Glen Rice.

Many wonder if this isn't just anther bunch of spoiled rich women with a new zip code. Does Miami have something unique to offer? Echevarria pointed out what sets them apart is "the mix of Latin, the Brazilian and Assyrian and our lovely Texan are bringing." She continued, "The uniqueness of the cast, the Latin Culture and the Latin girls. The way we speak, the way we look, the way we move. Our cast is very diverse but that’s what is going to really stand out — the fact that there [are] four Latin girls on the show."

Lea Black, who called herself the "token Gringo," added, "And the beauty of Miami. When you’re living up in a freezing part of the country and you're looking at… 70 degree weather with perfect sky and blue water, that’s got to be like a retreat for people."

Originally when the show was filmed over a year ago, it was undetermined if it would become part of the Housewives' franchise. Black divulged when she heard the news that Bravo had picked up the show she recorded every other city and watched them all. She stated, "I find myself fascinated and glued to the television and looking forward to them. Bravo is just got this thing going. It’s like the hottest thing going."

Echevarria expressed, "I really enjoyed watching Beverly Hills… Each show of the Housewives… we can identify and learn something from each of the ladies in our own way. I have similarities in my case with even Nene in Atlanta because I can relate to her that she has a son that’s a teenager and the problems and the relationship that she might encounter with her son… The public, once they get to know you and your character and your personality, it’s like they want to know more about you… I’m sure that if I feel that way about the other shows and the other ladies, the viewers will feel the same thing about us."

Still it's unclear if the women are ready for the media scrutiny and the microscope their families will be put under. Patton remarked, "I own a PR firm so I’m very well aware what comes along with all of this. And I’ve already played through in my mind and strategized with my team what’s probably going to come up, what are the most dreadful things anybody could say about me and I’m ready for them. I’m not perfect and if you don’t take things to seriously then you’re not going to get hurt."

Black conceded, "That’s something I probably need to give more thought to. But my life is an open book and my husband is a public person and I've been scrutinized already. And hopefully I didn’t do or say anything that would embarrass myself or my husband or his clients... But no, I don’t think I am prepared for it because I didn’t realize until recently how big the brand had gotten and how big the phenomenon was."

Echevarria acknowledged she is in the same state of denial as Black, "I don’t think you’re ever prepared to hear… something negative... Of course if it is something positive you like it and you’re happy with it… And at the same time since we choose to do this it just comes with the territory. And I remember that being a point with my husband saying okay, 'Well you got to know that from now on your life is public to everyone.' So that does scare me a little bit because I love my privacy."

The women are also anxious about how the show will affect their families and how their loved ones will be perceived. Patton's mother is a self-proclaimed "seer," always ready with sage advice. Patton revealed, "I’m very close with my mother and like most daughters we don’t like to listen to our mothers… But in the end she was always right. So I don’t really ask for it, she just tells me what she feels when she feels something and now I listen to her because she’s always dead on."

Patton recalled her first wedding day, "She brought me these very fancy pearls. And she said, 'I’ve been saving these your entire life you need to wear these or your marriage will be cursed.' And I said, 'We’re getting married here in the living room, I’m not dressed up, I really don’t think it’s necessary to put on those pearls...' And she was like, 'I curse you, and I curse your marriage, and you will never last with this man.' And she walked away and a few years later it was down the tubes." Patton disclosed she was upset with her mother that day, "But three years later I was cursing the marriage too."

Black was so worried about what the show would do to her family and friends that she kept her involvement a secret for a long time. She confessed, "I didn’t tell anybody that I did the show until I finished it. And then I denied up until Bravo said that they had announced it. So I’m getting a lot of people mad at me... I was trying to keep it at bay. I don’t know why, I guess I was shy about it."

Echevarria explained that the show caused problems in her marriage at first but they worked through it, "My husband is a lot more supportive now. In the beginning it was almost like divorce time for us. And now he’s like my biggest fan and he’s excited for me so I have the support, which is very important to me. My kids are super excited. They were one of the reasons why I actually did the show."

But it is Echevarria's kids and her parenting skills that may be under the most scrutiny. She admitted to letting her under age son go to nightclubs, which she knows will raise some eyebrows. "As far as going to clubs, every child at that age that’s what they want to do. They want to go into a club, they want to dance, they want to listen to music, they want to go see a special DJ. So do I enable it, do I facilitate it."

She continued, "I have that kind of communication with my son that I want to know what he’s doing, where he's at. There [are] other children that need to lie to their parents because their parents were not supported or help them or won’t be okay with them. My son doesn’t need to lie and for me that’s more important. I rather know the truth and there is nothing wrong with the truth and I don’t think there is anything wrong with an 18 year old wanting to go to a club."

This will most likely be a topic for hot debate when the women talk to Andy Cohen, Bravo's Senior VP of Original Programming and their boss, on Watch What Happens Live. Echevarria professed, "I’m a fan of Andy’s so I’m really excited about meeting him. I think he’s great, and I think he knows how to get what he wants… He really talks about what went on in the show and what happened… When we signed up to the do the show this was a part of it… being real and seeing who you are and there is nothing to hide now."

Black declared, "When I grow up I want to be Andy Cohen. How much fun is that job? To sit there, have drinks and talk to all the people that you watch all week. I just find it the icing on the cake of the whole phenomenon. It’s just interesting to me that they came up with that. And these women go on there and talk and you know what you’re getting into and you do it anyway… I think it’s like a stroke of genius that Bravo has made that the bow on the package at the end of each show. I think it’s great."

Patton added, "We're actually doing a big red carpet premiere on Monday and we’re all going to meet Andy for the first time there. So we’re all really excited about it. And all I know is from watching the show is that whenever he asks questions you might as well just tell the truth because it all comes out in the end anyway. So honesty is the best policy and just have fun with it because he’s having fun. It’s all about the comedy and the entertainment and hopefully we’ll be delivering all of that."

To see if The Real Housewives of Miami deliver tune in to the premiere on Tuesday, February 22 at 10 p.m. EST/9 p.m. Central on Bravo.