Tom Hanks is a Lot of Animals 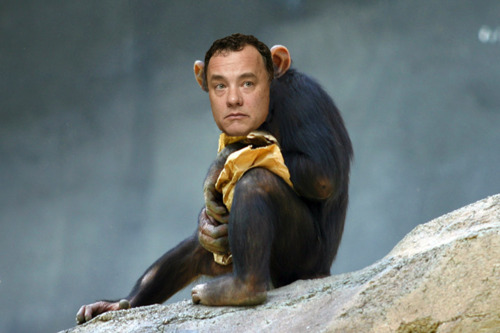 . But we have come across what just might be his most important work to date.

In this undertaking he is transformed from man to beast. He shows his stripes and spreads his wings. He lets his hair down and throws caution to the wind. He is different in every shot and yet completely recognizable as himself.

So what is this new Hanks vehicle? It's not a TV show, or a film or even a stage play. It's a Tumblr blog that posts daily images of the actor's face Photoshopped onto numerous creatures' bodies. Go right now and check out Tom Hanks is a Lot of Animals (Tomhanksimals for short). It's hard to keep a straight face. Our favorites are the Shetland pony, the monkey, the crazed parrot and the brown bear.

The genius behind the site is anonymous, as are all Tumblrs. But he did recently post the answers to some nagging questions for his followers.

Q: Where’d you get the idea?

A: Well it all began one Sunday morning in Scotland. (Actually, it didn’t begin in Scotland at all. I just thought that's how all stories started.) It actually started with my friend daring me to make the stupidest tumblr I could think of, and if it got 100 followers in the first week, he would buy me Photoshop CS5 (Which I obviously desperately need).

A: As far as I know, Tom Hanks has no idea. Though it would be terrible/hilarious if he did.

Q: I don’t think I’ve ever seen something so stupid. (ED NOTE: This is in fact, not a question, but an excellent point).

A: Thank you. I could not agree more.


So if you're a fan of Tom Hanks and have a few minutes to spare, visit tomhanksimals.tumblr.com. You won't be disappointed.

For more pop culture stories check out:
Epic Meal Time – Not for the Faint of Heart
This Gorilla Walks Like a Man