Andrew McCarthy Talks About His Roles, Regrets and Travels 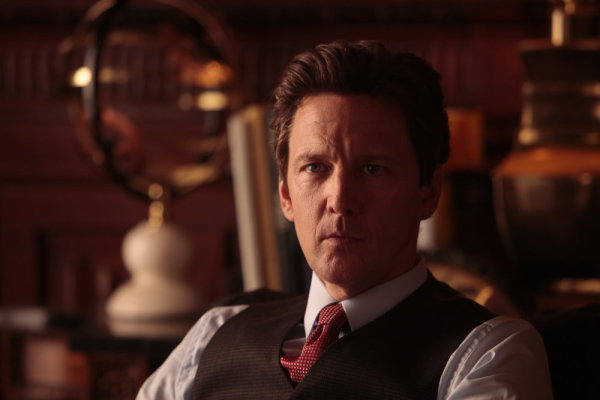 Photo by Will Hart/USA Network

Tonight Andrew McCarthy will appear on the season finale of USA's White Collar. He will reprise his role of Vincent Adler, the mentor who taught Neil Caffrey (Matt Bomer) everything he knows about the art of the con. In a recent conference call interview, we found out ten things that Andrew McCarthy knows about TV, movies, travel and donuts.

1. On The Current State of Television
"When I started acting, 100 years ago, in the early ‘80s, you only did the television show if your movie career was over. Now I’d say most of the best writing is on television. And movies are a different beast entirely. There’s the big blockbusters and then occasionally, there’s some little interesting movies that come along that somehow get made and 12 people are in them. I think it’s a real golden age for television for sure."

2. On Preferring TV to Movies
"TV is faster, period. And sometimes that’s a good thing… I enjoy the TV pace. You’re always under the clock, but that’s not the actor’s problem. It’s a director’s problem."

4. On Getting Into Acting as a Kid
"I acted when I was a kid because it was what I found that made me feel most like the way I wanted to feel. So it was a way out, or a way in, for me. It saved my life in certain ways and changed my life, certainly, and gave a form and structure to my life."

5. On His Favorite Roles
"I played Henry Miller in a film called Quiet Days in Clichy a long time ago that I liked quite a lot. Heaven Help Us

… a movie I did very early on in the mid ‘80s, is my favorite movie I did of that period of time. With all those Pretty in Pink

, and all that, I thought that movie was actually the one that was the most interesting to me. Although I thought the part in St. Elmo’s Fire was a terrific part for me at that time. It was a perfect match of me and part. I loved doing Weekend at Bernie’s

6. On Roles He Regrets Playing
"There are some bad movies I wished I didn’t do. They did a Mannequin 2

and they asked me to do it. And I didn’t do it, and I think I probably should have done it, because it was nice fun… I probably shouldn’t have done Weekend at Bernie’s 2. The first one was very funny. The second one was whatever it was… I don’t really look back in that way or have much nostalgia either way for any aspect of my life, really."

7. On Advice for Young Actors
"Acting is a funny racket and it’s been very good for me in certain ways and then heartbreaking in other ways. And it’s a long road to trudge in when you’re at it for a while. If you have to act, then you act. If you don’t, you can do something else you can do that you really enjoy doing, go for it."

9. His Favorite Places to Travel
"I’ll always go to Hawaii any day of the week for any reason. Usually the next place I’m going is my favorite. I’m game to go anywhere. I find the planet a pretty interesting place. So I like going. I like finding [out] what it is about each place that’s unique. I don’t have particularly one favorite spot. Although I’d have to say I guess at the end of the day, I’m an American. I like coming back here."

10. On Why Travel Is Important
"America, and consequently the world, would be a hugely different place if Americans travel... But Americans are so fearful of the world, so consequently when people are fearful, they judge it and judge it negatively and push it away…  It's just made me a better person and more open person to some degree… And all our experiences by osmosis influence who we become and who we are. It’s given me some joy and so when I find joy in acting, I’m a better actor."

For related stories check out:
Tim DeKay and Matt Bomer Talk about White Collar
Willie Garson Interview: All About M