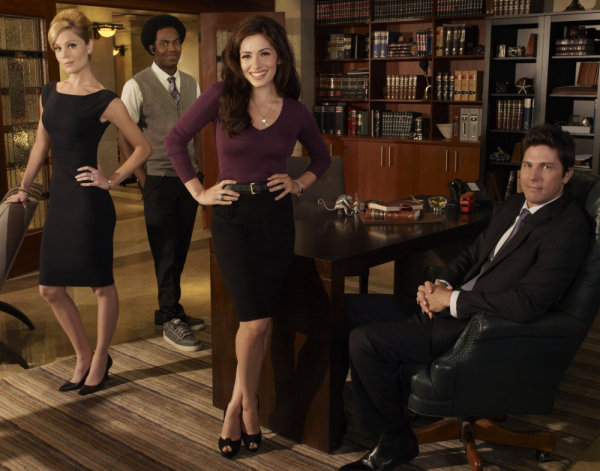 Baron Vaughn, who started out his career as a stand-up comic, and Virginia Williams, who almost made the cast of the Britney-Christina-JT-era Mickey Mouse Club, have both somehow managed to wind-up as characters in a law firm on USA's new drama Fairly Legal. The show stars Sarah Shahi as Kate Reed, a lawyer-turned-mediator at a law firm owned by her deceased dad's young, hot widow played by Virginia. Standing by Kate's side is Baron's character, her slightly nerdy assistant Leonardo Prince. The series has been getting great reviews and seems to be a fan favorite for USA, but as of yet, a second season pick-up has not been announced. We spoke with Virginia and Baron in a recent conference call about the chances for season two, working for USA and the atmosphere on the set.

A Second Season for Fairly Legal

Many actors on USA shows that we have spoken with over the last year feel blessed to be working for the network. The channel carefully considers each show before it's greenlit and they give each one a chance to find an audience and grow. And while Fairly Legal has yet to be renewed, every recent show that has debuted on USA has been picked up for a second season.

But that success does not alleviate the pressure for the Fairly Legal actors. Virginia stated, "I don’t think there’s any calm, my friend. I wish there was. You never know what’s going to happen, and you never really know why it happens so often. It is true they do have a perfect score and USA is a phenomenal network to be a part of and one of the reasons. I’m sure all of us in the cast chose to be a part of this show, and we’re honored to be a part of it, because of the great track record. You’re probably going to get a much better shot of having multiple seasons on, when you do something for USA, then you are for another network, be it cable or not. In some ways there’s a sense of anticipation and excitement in that we’re probably more likely to get picked up, but there are no guarantees in this world, and as actors we go from job to job."

She acknowledged, "I think we all love this show and we all want to continue to be a part of it. I know for myself I have fallen in love with the character of Lauren. I find her, of course I’m biased, but I find her the most interesting and complex of all of them and I would love to be able to explore her more and to play with her for years to come… I just think she’s delicious… But none of us have any guarantees in this business. The entertainment industry is a very finicky one. So we just cross our fingers and pray to the ratings gods and hope that USA will smile upon us and give us another shot."

Baron agreed, "USA is very picky with what they develop in the first place. So for them to go forward with the show at all is already a tremendous vote of confidence. Of course I’m hoping and wishing and praying, as that song goes, that we will have a few seasons. I believe Heidegger said it best, 'Just because something has happened in the past doesn’t mean it will in the future,' but you can hope and have a good attitude about it, and if it doesn’t happen then I’ll cry for a day, eat a lot of Cocoa Puffs, but I will put myself back on Baron horse and go somewhere."

Virginia added, "I think we’re all quite confidant that the show’s doing well. People are responding to it. It has a great lead-in of Royal Pains. I think it’s a wonderful pairing, these two shows together, and the response has been pretty incredible. I think I heard somewhere it was the best-reviewed USA show ever before it launched. So hopefully the audience will continue to find it and to keep watching, but I think we’re all pretty darn confident it will be renewed. We would just like them to go ahead and give us that gold star so we can start planning our lives."

USA has become known for creating inter-network crossover episodes on some of its shows like Royal Pains and Pysch or Burn Notice and White Collar. So Baron and Virginia disclosed which USA show they would like to crossover with. Virginia confessed, "I have a huge crush on Mark Feuerstein. So I would love to go on Royal Pains. I actually tested for the role of Jill before I got this. I guess it was a year before, and I really liked that script. I thought it was a really good show. I think it all worked out for the best. I think I’m absolutely meant to play Lauren, and I love what I think I can specifically bring to her, so things happen for a reason. But I think that’s a really fun show and everyone on it is just adorable. I guess that would be one I’d love to be a part of. I am a big Dulé fan, too, though. So, I’d love to have Lauren go over to Psych and maybe help them with some legal case they may be in. That would be lots of fun, too."

She continued, "I just noticed that two of the shows I mentioned are two of the most comedic shows on USA. They have more of a comedy bent than some of the others. I think that that’s actually probably what I’m really thirsty for right now is doing more comedy. I love comedy. I feel very much like comedy is a forte of mine, and Lauren doesn’t get a lot of opportunities to be funny. So let’s hope and pray that in future seasons we get to see Lauren in more comedy. Maybe she can let her hair down, literally and figuratively, and make some people laugh."

Baron followed up with his crossover dream, "I think my answer can be summed up by a line that I would say.  “Michael Westen meet Neal Caffrey.” That’s what I would do. Yes, definitely. It would be in Miami, but Neil’s got to come down to help Michael with something, and Leonardo is the only one who knows how to do the programming that they need to get done, and then stuff will explode. Then me and Bruce Campbell will be best friends."

The series is still too young to be getting the big name guest stars as seen on some of the other USA shows, but they do have Gerald McRaney and Richard Dean Anderson in recurring roles. When asked who would be their dream guest stars, Virginia declared without hesitation, "I know it’s so obvious, but Meryl Streep. She has been doing some guesting on an HBO show. I just think she’s the most incredible actress of our generation. I’m clearly in the same boat with everyone else, but [I] still [love] every single thing I watch her in… She has this amazing ability to transform into any character, and I would kill to be able to work with her, and pick her brain, and just have a conversation with her. In my work I try really hard to pick very different roles. I don’t just keep playing myself over and over. In fact I rarely play someone similar to me. I so often play different types of characters that are quite different from who I really am. And I think she’s done the best job of anyone, male or female, of really transforming herself every time she performs. So I’d kill to work with her, period, in any capacity."

Baron had slightly less lofty dreams when it came to choosing a romantic partner for Leo. He remarked, "I’d be very fascinated to know what the story was if Leo walked into Reed & Reed holding hands with someone like Rene Russo or Frances McDormand. Yes, or a Kimberly Lee, somebody like that. I would be interested to see what the back story of that would be."

Virginia expanded, "I think somebody just as fun and quirky as Leo is. Someone that he could have really quick, ridiculous banter with would be the most fun to watch. He’s a really unique character on our show and… He doesn’t have any one he can really spar with. He somewhat can spar with Kate, but I think if he had an equal nerd, it would be really fun to watch them go at it."

The Atmosphere on the Fairly Legal Set

But Baron has plenty of equals to spar with off camera. Virginia described the atmosphere on the set, "There’s a lot of singing. Baron and I love to sing, and Sarah loves to join in as well. I think she has a lovely voice. She says she doesn’t sing as much, but I would disagree with her. I think she has a lovely voice. The three of us have scenes together a lot… And we just sing and laugh and dance… Baron always gets so jarred by, 'Oh my gosh, you just transform into Lauren when they say action,' because I’m so goofy off camera. But we really laugh and we joke a lot and there’s a lot of dancing. These are long days. You work sometimes over 16 hour days and you’re up at 4:00-5:00 in the morning and you’re exhausted. And the only thing besides another cup of coffee at 10:00 at night that’s going to keep you going is to turn up the music. One us will pull our iPhone out and put on some music on it and just dance while they’re setting up the next shot."

Baron recalled one day one in particular, "The crew and the background actors are so good-natured, too, so we all have a lot of fun… One of the prop masters put a few apps on the iPad. And one was a sitcom app where it has three different sizes of laugh — like a small laugh, a big laugh, and a medium laugh, some applause, and then like people going, 'Oooooh' and 'oohoo.' Basically it’s the Married with Children sound effects. And every now and then I would break it out when people were talking. I was just hitting buttons just to make it all sitcomy. Everybody had a lot of fun with it."

To see if this off camera chemistry translates to the screen, tune in to Fairly Legal on Thursday nights at 10 p.m. EST/9 p.m. Central on USA.