Justin Pope is Not The Biggest Loser 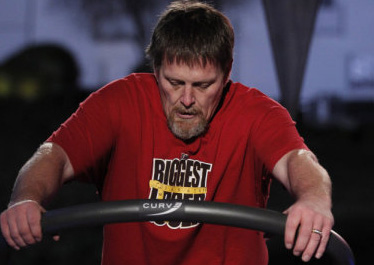 Were you as shocked as we were to see Justin Pope get sent home this week on The Biggest Loser? Justin was, by far, head motivator on the ranch and had consistently had one of the highest percentages of weight loss week after week. And yet by luck of the draw, and his first bad weigh in, he ended up below the yellow line and facing elimination. And then in his final selfless act as team leader, he begged the other players to send him home so Courtney Crozier could stay and finish the journey she so desperately needed to complete.

There was also the drama during the weigh in when Kaylee Kinikini intentionally gained pounds because she was ready to go home. In a recent conference call interview Justin said his cast mate approached him earlier in the week and revealed her plan to him. He acknowledged that he could see a shift in her personality and agreed with her choice. He mentioned that for her it was never as much about losing weight as it was about finding herself. He stated, "I told her from the start, 'For you it’s when you can have your voice be heard and be proud of who you are, and not that shy bashful girl that doesn’t have an opinion.'"

He conceded that in the final week she was different, "It wasn’t her looking down at her feet and trying to have a conversation. It was her looking me in the eye and saying, 'Hey, I’m ready to go. I’m ready to take the next step in my life. I want to go home. I want to go college. I want to date guys. I’m ready to do something different with my life. I’m just exercising at this point.' And I couldn’t argue with it at that point. I’m like, 'Okay, Kaylee, I understand. If you’re ready to move on then move on.' And really I was proud of her at that point that she could have that opinion."

And so Justin went home, but he was also a changed man. He divulged that before the show he was lying to himself, "I didn’t see myself as obese. I had a hard time saying that word. I knew I was overweight. I knew I was even fat, but not obese. I still woke up every morning and went to work and worked just as hard, or harder, than anybody around me. And I put in the hours and I didn’t really have a focus that my weight was a problem. You learn to live that lie and that’s your life."

So now that The Biggest Loser contestant is being honest with himself, his whole world has changed. And yet that brings a struggle with how others view him. He confessed, "That’s been the toughest part is having other people accept that you’re new and you’re different. You have confidence and you’re opinionated, and sometimes you’re stingy with your time. And you learn how to say, 'No.' And all those things are difficult. The exercise and the diet, they’re spot-on for me. I don’t have a problem with them at all."

Justin has discovered that helping others is the best way to help himself. Through his work at the gym he has become a coach and motivator for others trying to battle the bulge. If he sees someone he thinks could benefit from his help he gives them a Justin Call Out t-shirt and challenges them to make a change. He noted, "I like to push people and so I designed the shirts. It was originally just for a handful of people that I felt like needed a call out that needed me to help them learn everything from exercise to diet to self-confidence… I delivered them to their doors and have them come down to class."

He expanded, "It’s not just a call out, it’s a help out, help people out and gives them someplace to turn. And I’m kind of greedy myself because I use their fire to light my own fire. It makes me push harder when I see them there and I feed off their energy, and it makes it for a good workout when you’re feeding off each other."

Justin disclosed the most significant change he feels after being on the show, "I think the biggest difference between me before the ranch and now is the fact that I’m educated now. I know what I need to do to make myself better and I have. I wouldn’t necessarily say that I’ve made myself better, but I’ve found that person that I lost."

So now Justin just has his eyes on The Biggest Loser finale, and when asked who he thought will win he responded, "I tell every contestant that’s eliminated, 'Hey, this is what I’m going to weigh at the finale. And I hope like hell you beat me. But I’m going to push you to that point. If you step up and beat me, good job. I’m proud of you.' And so for me, that’s just one more motivator to be the best I can be. And I’ve just got to get one last push in on everybody."