Our Interview with Shark Tank's Kevin O’Leary and Robert Herjavec 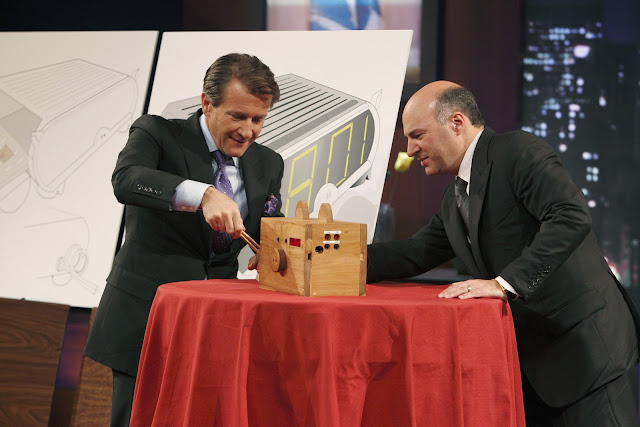 After a sneak peak on Sunday, Shark Tank officially kicks off season two tonight with a brand new batch of hopeful inventors and entrepreneurs and a few new sharks circling, waiting for the next good idea. This time around venture capitalists Kevin O’Leary, Robert Herjavec, Barbara Corcoran, Daymond John and Kevin Harrington will be joined by guest sharks Mark Cuban and Jeff Foxworthy.

In a recent exclusive interview with two of the sharks, Kevin O'Leary and Robert, discussed the addition of Cuban and Foxworthy to the team, some of the best and worst pitches and advice for young business people.

The promos for the new season say the sharks offer over $10 million, more than double what was invested last year. O’Leary and Herjavec said this is definitely an indication that the ideas are stronger and that more credible people are coming forward. They also mentioned that in this bad economy business people have fewer options for getting funding so the sharks are more popular than ever.

O’Leary and Herjavec also professed that the addition of comedian and businessman Jeff Foxworthy and sports/media mogul Mark Cuban brings a new dynamic to the tank. They add expertise in areas not previously covered by the original sharks.

And even with these changes, one thing remains constant. Kevin said that the biggest mistake people still make when doing a pitch is "coming in with ridiculous valuations." He continued, "Anybody that walks up and says, 'Look, here's an idea I dreamt up in my garage and I want a million dollars for it.' I just hit the eject button. They're gone."

But if they are educated about their product and reasonable in what they feel is its value, he remarked, "You're starting to get a feeling that maybe this person's a winner and you can start to see the sharks circling for an opportunity that may be appealing."

But when a pitchman walks out of the shark tank without an investment in hand, Kevin and Robert feel no love lost. Robert commented, "I never regret anything. The minute those people are gone, they're gone. I don’t remember them. There [are] a million deals out there to come tomorrow."

Kevin added, "I think everybody that comes on that show should realize this is their one big opportunity. Don't blow it. Because there's always somebody waiting right behind you that may be even better. That's just the way life is. That's what I love about Shark Tank. It's real."

And while they may not regret letting a good idea walk away, they still have yet to determine if the investments they did make last season were worthwhile. Kevin explained, "A venture deal takes on average five years to come to fruition. You've got to stick with these things for a long time."

He referred to one of the first deals they made at the beginning of the series with Mark Furigay and his Classroom Jams. In this season's opener viewers will get to revisit Mark and see his progress. "Look how long it took to get Classroom Jams in front of Houghton Mifflin, the number one educational publisher in the world. But he got there. And he got himself a national test. He's one of the first deals we did and that was the plan. We said, 'If we can get him in front of the nation by going to the number one publisher on earth, this thing could work' and that's exactly what happened."

He excitedly proclaimed, "Shark Tank's a platform. It really is the American Idol of venture capital. The brand name itself, large companies now want to associate with it and get involved and that's what happened with Houghton Mifflin. So now, Mark Furigay, who would have never ever ever ever had a chance to get his deal published with a large publisher has that opportunity now. That's what Shark Tank can do for anybody."

Robert added that they also got Grille Charms into the biggest barbeque store in the world and the sales are taking off. But he remarked that we may not see the results of any other investments for quite sometime. "As Kevin says TV works in short cycles and business oftentimes works in long cycles. So we'll start to see some of that success just like we have in other countries."

One product we won’t be seeing anytime soon is what both Robert and Kevin considered to be the worst pitch they've seen on the show. When asked his pick for the least successful idea, Kevin replied, "I'm thinking the pig box with bacon."

Robert clarified, "Somebody came out with an alarm clock that wakes up in the morning with the smell of bacon."

Personally, we think that's genius. Guess that would explain why we're not billionaire sharks.