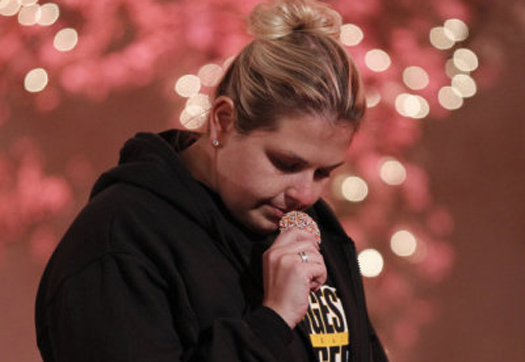 Jennifer Jacobs, the latest eliminated contestant from The Biggest Loser, went on an emotional journey she never expected. In a recent conference call interview Jen talked about her life before, during and after the show.

Jen seemed like a strong and determined player right from the get go and yet she conceded that she was broken when she started out. She admitted, "I came to the ranch as somebody that knew that they had always wanted to lose weight… but I think the missing piece was that I never believed that I could do it."

She also acknowledged that she was afraid to lose the weight because she would no longer be able to hide behind that excuse. She remarked, "I never imagined the workout that I would have to go through in my mind to realize that I am just as deserving of this opportunity as any other person that wants to change their life. I came to the ranch a person that always knew that they had some sort of strength in them, but I didn’t realize the depth of how far I’d have to dig to find that person inside of me."

But since doing the show, all that has changed. She has a new man in her life and enjoys every opportunity. "I look forward to every single day living and being in the moment and being present… I am so in the moment right now and enjoying my life and where it’s heading, opposed to just trying to pass the time."

She credited her trainers and fellow contestants with helping her reach this level of emotional satisfaction. "I am true to Bob and Jillian. I love them to death. They have transformed not only my life, but my father’s life, and then have impacted us in such a way that I think it’s very difficult for a person to really understand how much that means to us in our lives."

As for her fellow players she commented, "You can’t help but build those incredible relationships with the people that you are literally sharing your blood, sweat and tears with every single second of the day… The most important thing that mattered was that I had built those relationships with those people… And [I'm] so thankful that they’re going to be in my life going forward. I can’t imagine living life without them."

Now that she's home she is calling on another relationship to help her through any hard times and keep her on track — the one with her brother. She explained that her whole family had struggled with weight and that her brother took off 70 pounds on his own five yeas ago. So she noted that he is a big influence in her journey. "When my dad and I went away to the ranch, he was a major driving force in our family to help to not only motivate us while we were away on the ranch, but also help to get my mom in shape. My mom is down 50 pounds… He’s done such an amazing job and been such a big motivator for me and my dad that it’s amazing how much his energy and his determination has not only affected himself, but so many people around him."

Fortunately for Jen, her family all understands what she is going through and she has a very strong support system. Because she revealed that the biggest challenge is not falling into old patterns. "It’s difficult because you’ve changed so much and you’ve come home and everybody around you, and your life is still very much the same. So it’s really dealing with those people that either have sabotaged you in the past or gotten in your way or obstacles that you encounter in life or distractions that you have around you, temptations of food, those are the things that are the most difficult part."

She said she overcomes these feelings by remembering her Biggest Loser days, "When stuff like that starts to creep into my head or I feel like I’m losing control I just have to continue to remember what life was like on the ranch. And bring my mind back to what it was like to literally eat, sleep, breathe, live, diet and exercise. And not let the chatter and the energy from the people around you take you away from all that focus and hard work that you’re putting towards your goal."

She divulged that she was unsure in the beginning if she could meet her expectations, "I was thinking to myself, 'I can’t even imagine how I’m going to get down to my goal weight and walk across that stage at finale in a tiny little dress.' But I know if I trust the process and I trust that if I’m determined to get there, I’ll get there… The physical aspect of this journey, I thought was going to be the most difficult, but that is by far the easiest part. For someone that had never been skinny or never been at a healthy weight, this part of the journey, the emotional and mental portion of the journey, it is the most difficult strenuous, stressful, taxing part of it."

She continued, "You’re able to do things in your life that you’ve never had the chance to do before, and it takes a little while for your mind to catch up with your body, especially because the weight loss is so rapid that it’s a big shock."

Jen is lucky enough at home that she can still devote her entire day to her Biggest Loser program without having to take time out for a job. She described an average day as a morning run, a healthy breakfast, two hours of cardio, a nap, a spin class and then more rest. After a well-rounded dinner she spends two more hours in the gym and takes a long evening walk.

Jen summed up her experience saying, "Going into this I was very confident in the person that I was, in terms of my morals and ethics… but I just wasn’t happy with the exterior, what everybody else saw on the outside… what I realized from being on this journey is that the person that I was, that outer shell, was not the true person that I really was. And now what I find myself doing is really living each day, as it’s a new day because the person that I am today is my true self. This is the person that should have been out there living, having a wonderful time experiencing life all along, and I really am thankful for Biggest Loser to be able to help me to see that."


For related stories check out:
Justin Pope is Not The Biggest Loser