The Judds Work It Out on a New Docu-Series 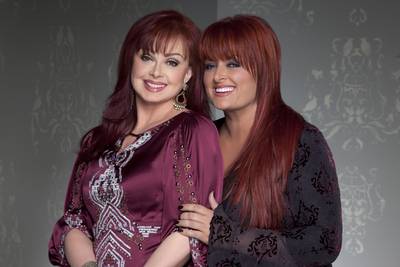 The Judds are back. Bigger and, theoretically, better than ever. At least that's what they said in a recent conference call interview. Naomi and Wynonna's new series The Judds premieres on the Oprah Winfrey Network on Sunday, April 10, and from the sounds of it, the whole experience was one big therapy session.

The pair have been very vocal through the years about the struggles of working with each other for so long. And this docu-series, which follows them on their latest tour, exposes that drama to the world. With therapist Dr. Ted Klontz firmly seated on the tour bus, Naomi and Wynonna hit the road and struggled to overcome the issues that have been haunting them for decades. And the good news is, we get to watch the whole thing.

When asked what they've learned about their relationship Naomi commented, "I will always be her mom... she thinks that I'm superwoman. She thinks that I know the answers. She needs me so desperately that sometimes she resents me. And no matter if we're doing the bent over double belly laugh, if we're warm and cozy with a fire watching a good movie, I will always cast a shadow over her. And now I'm aware of it and I want to affirm her and I want to try to understand her sensibilities towards me. It makes me more present and equal in our conversations and the way we are with each other."

Wynonna remarked, "This tour made me appreciate my mother even more. First of all mom, I don't know how you did it night after night... I respect you so much as a professional and I respect you as a daughter, because you were so good at listening and following directions."

The pair said they wanted to do the show for themselves and for those who love The Judds. When asked what she wants people to take away from the series, Wynonna remarked, "I think we're real. I think what people need to know about this show, honestly, is it's real... We want the fans to know who we are, not just what we do. The show is so real and so raw, that people are going to be surprised."

But she did reveal there was a moment that she wondered if she had made the wrong choice to have the cameras following their every move. She explained that she was onstage and that Naomi was behind the scenes doing a costume change with the manuscript to Ashley's new tell all book in hand. Wynonna recalled, "I had a real moment of 'Uh oh this is not going to be good,' because the timing was just too much for me... It was an unbearable, at times, schedule of trying to film and do all of this and then Ashley decides to send her book, which she totally deserves to be heard, [but] the timing kind of sucked."

She continued, "But I understood. And yet I stood between these two women that I loved and I remember thinking, 'A vacation to Hawaii right now would be really great. And how fast can I get out of this?' Because I know my mom's going to struggle and suffer through this because of the parental stuff in there and yet I've got to tour with her. What is this going to do to my mom? So I became protective of her, understanding and compassionate of where Ashley is and I found myself in an unbearable place of being between two women that I really love and thinking I don't think this needs to be on TV."

But it is. Naomi divulged that she has not read the whole book yet but noted, "I owe it to both my daughters and certainly the people I care about... to try and discover and comprehend their reality."

Wynonna got slightly uncomfortable when Ashley was brought up reminding her mother, "We're not supposed to talk about Ashley, mom." But Naomi replied, "All I have to say is that I haven't read it. You can imagine if you wrote your reality and your mother wrote her reality and your sister and your siblings everybody's going to have a different one. Ashley's not involved with this simply because she went to Harvard last year, she's getting ready to do a series, she's done two movies this past year. Of course she's part of it. She came to one of our first concerts. She's my daughter. I absolutely I love her with all my heart unconditionally and that's really all I have to say about it."

And that's the message that comes through loud and clear, even with all the pain the Judd family has suffered. At the end of the day they respect and love one another. When asked to describe what they admire in each other, the reviews could not have been more glowing.

Wynonna started by relating, "As a daughter, my mother's work ethic is unparalleled... Mother is the most colorful character I've every known. She's willing to be... as raw and vulnerable and real as anyone I've ever known... The thing I love the most about my mother is her compassion for others and her ability to be fully present."

Naomi countered with, "I think the first word that comes to mind for Wynonna is compassion. And sometimes that actually works against her because she's so giving, her heart just breaks wide open. And sometimes I get concerned... that she forgets to put herself on the list. She doesn't know when to say know... She is so tenderhearted. And also the stinkin' funniest human being ever. We can look at each other and just roll over with laughter... There's joy. There's laughter. And she lives in the moment. Very impetus, very spontaneous and I'm pretty much in awe of the depth of her instinctive musical gift."

And while as Naomi pointed out, "We agree to disagree a lot." Wynonna professed that that's a positive trait, "What's so wonderful about our family is learning to disagree in a healthy way and walk away going, 'Gosh I really disagree but I support who you are because I love you and I know your intentions are good. You're not trying to sabotage and be in control and be right.' Some families have the mistake of I'd rather be right than be loved. And for momma and I on this show we decided together that we would be loved.... I love her and the relationship is more important than the ratings. And so for me it was about my relationship with my mother. I just want people to know that, that we agree to disagree on the show."

For related stories check out:
Rascal Flatts Proves There's Nothing Like This
Lisa Ling on Oprah, American Idol and Our America