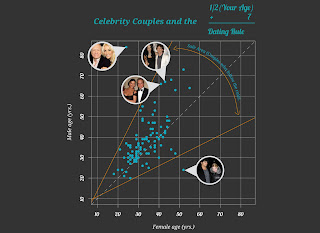 We have unearthed the latest case of math nerds meeting pop culture. The good people at Revolution Analytics have taken OK Cupids' list of the hottest 100 Celebrity Couples and designed a scatter plot to see who falls in the socially acceptable rule of dating — "half your age plus seven."

Don't know the adage? It's an age-old urban legend that justifies old dudes going after young girls (or vice versa). It basically states that if the object of your affection is at least half your age plus seven years, the age spread falls within the realm of social decency. So in this era of May-December romances from Sean Penn and Scarlett Johansson to Hugh Hefner and Crystal Harris, Revolution Analytics wanted to test the theory to see how it applied to these couples.

What they found is all but two couples broke the rule. Our Playboy pal Hugh is way outside the "Safe Area" of the chart with a 60-year age difference (he's actually surpassed three times your age plus seven). And Madonna clocked in at 28 years older than her most recent boy toy Brahim Zaibat. For those who were playing along at home and trying to guess who didn't follow the rules, you were wrong if you picked Michael Douglas and Catherine Zeta Jones, Mick Jagger and L'Wren Scott or Bruce Willis and Emma Heming. They were all right on the border of indecency but fell within the legal limit.

And while we personally think each couple is unique and every circumstance is different, a quarter century age spread is probably not right for everyone. So we wonder, does this test reveal that most people are playing by the rules, or does it  instead, point out that the rules of the game might need changing? Just saying.