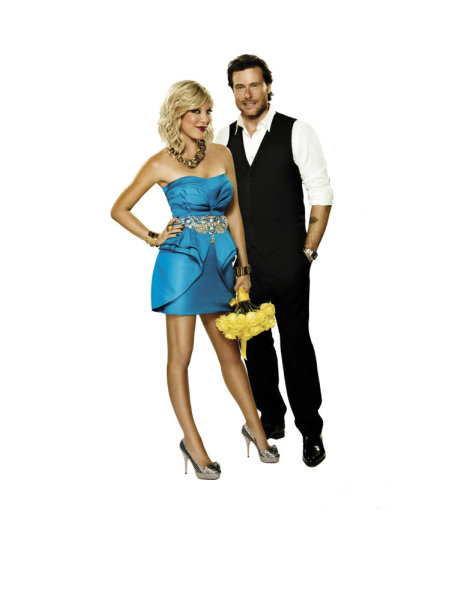 
We knew the day would come. We finally got to talk to 90210 star turned reality TV’s busiest mama, Tori Spelling. In a conference call interview Tori and her husband, Dean McDermott, talked about their new show Tori and Dean: sTORIbook Weddings, how they balance work and home lives and their own special day.

Tori and Dean: sTORIbook Weddings is the third reality TV series that the couple has done together. Tori explained how she and Dean balance their combined professional career and home life. “If you’re doing all the things you love then you can make everything work. Because everything kind of falls into the same role. Everything we do involves stuff together, stuff with families. If it’s planning, if it’s decorating, if it’s parties, weddings, books — it’s all about things that we love.

Dean told us how they are able to juggle so much, “That saying, if you need something done give it to a busy person. And that’s how we kind of look at things.”

And Tori and Dean are always busy. In addition to sTORIbook Weddings, Dean recently wrapped production on a movie that’s due out this Christmas. He revealed, “It’s sort of the sequel to Trainspotting. It’s about personal goals and the changing of drugs… It was heroin in Trainspotting and this one is ecstasy. It’s going to be in the Toronto Film Festival.”

As for doing the new show together Dean confessed, “It’s awesome. A lot of people say, ‘How can you do it? How can you work so close with your spouse? I mean you’re together all the time.’ And we wouldn’t have it any other way. We don’t function well apart.”

Tori added, “We don’t know any difference because we’ve been working together since we met.” That was on the set of the 2006 TV movie Mind Over Matter since then, Tori and Dean have produced kids and now three reality shows. They must be doing something right.

Yet Tori divulged that sTORIbook Weddings is even more special than their past projects as a team. “This is really different than working on other projects together. Because the greatest thing about this is, literally, at the end of every wedding it’s like we get to celebrate our love story all over again. Because everyone loves the wedding you can’t not get emotional and reminisce about your own wedding when you’re at another wedding.”

Tori described that special day she shared with Dean, and only Dean at the Wakaya Club in Fiji in 2006. “We got married alone so I loved in our wedding what we did we did everything that people do at weddings. Whether you have it was just the two of us or 100 person wedding. We had a rehearsal dinner with us… invitations with us. And we did our first dance alone, we cut the cake and we threw the bouquet into the ocean. And so we did all the things you would do at a normal wedding we just did it alone. And we didn’t have to talk to people all night long.”

Tori and Dean revealed their favorite parts of their wedding. For her, she said, “Doing it alone.” While he had a more romantic reply, “That I got to marry the girl of my dreams.”

The couple admitted that there day was almost flawless — with one minor exception. Spelling recalled, “It was perfect except our cake.” McDermott chimed in, “Yes, we wanted a butter cream frosting on our cake… And they used salted butter…. It was really salty.”

Everything went without even a tiny hitch when Tori and Dean renewed their vows last year, something they’d be happy to do on a regular basis. Dean remarked, “Every time at the end of a wedding we realize how much in love we are. And yes, I’d love to renew our vows again, and again and again.”

True to Tori and Dean fashion, their kids Liam and Stella get in on the wedding planning act, too. McDermott noted, “They like to help out with the weddings.”

Spelling added, “What we film is the reality and the reality is that we’re at our home planning a wedding, getting everything done. They went with us everywhere because we don’t like to go anywhere without them. So when we go to any hotel to do the wedding we would take the kids and they would be there to help us set up and then they would stay the night there with us.”

So it’s needless to say fans will be seeing the Spelling-McDermott kids on TV again this season. Tori told us, “They are in and out of the wedding show sporadically a little bit in every episode. And now Liam is addicted to hotels because he doesn’t understand why we don’t go to a hotel every weekend any more now that the wedding show is over.”

Of course planning weddings is now just one of the many projects that Tori and Dean have in the works. In addition to the new show and Dean’s upcoming movie, they have other business ventures on the brain. McDermott described them as “serial entrepreneurs.” He continued, “We’ve got so many ideas and we’re always trying to flush them out and see how viable they are. And if they are we move forward with that.”

One thing Dean won’t be doing anymore is racing. He confirmed, “I gave up the dirt biking and that’s what caused that accident. But I ride around a little bit I do my charity rides and stuff like that.”

He would be open to using the skills he exhibits on sTORIbook Weddings in his own construction show. He exclaimed, “Oh, I would love that. I learned all my handiness from my dad who is a carpenter and I love building stuff. It’s just such a great sense of accomplishment and a great feeling when you finish something. But I’m an average guy and I know a little bit about everything and a master of nothing. So I would love to do a show like that where it’s like, ‘Hey, let’s figure this out together kind of thing.’”

For now he’ll use those skills on Tori and Dean: sTORIbook Weddings, which premieres on Wednesday, April 6 at 10 p.m. EST/9 p.m. Central on Oxygen.

Bobby Flay Will Bring Us America's Next Great Restaurant