Back the Future's Jeffrey Weissman Holds a Fundraiser for His Wife 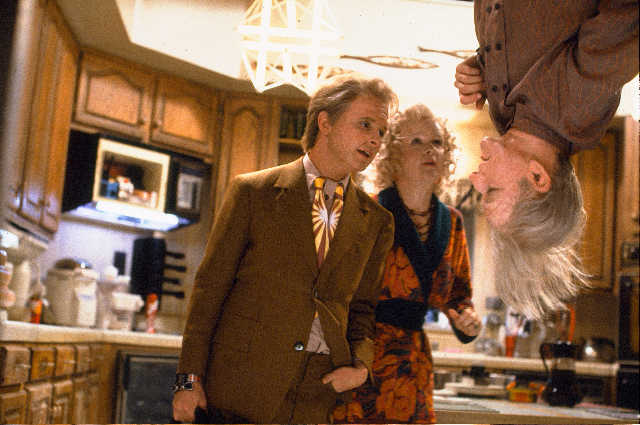 Actor Jeffrey Weissman got his big break auditioning for, but not being cast in War Games

. Instead he caught the attention of a big agent and was soon cast in the Twilight Zone

movie in the, "Nightmare at 30,000 Feet" story, with John Lithgow. He did small parts in Johnny Dangerously

with Sean Penn and Donald Sutherland and a few guest star spots on TV series like Dallas and Scarecrow and Mrs. King

. In a recent interview he told us, "It was a gas being on location with Clint. He was a real gentleman and did everything first class. It was a nice event."

After that came Back to the Future II

. He played George McFly, Marty’s father, in the two sequels. He recalled what struck him most about making the film was the set decoration. "[There was such] amazing care and attention to detail on those films. For example, the McFly household of 2015, the smallest item in that house was detailed. It was fabricated or made to be futuristic and had some elements of the McFly story in it and most of those props or set pieces you'd never see on film or it's just that you'd glimpse it in a pan. And I go back and I look at some of the stills I have in my collection and a lot of the things I notice in those stills you never see on screen. The creative powers, the art direction, and all, is just spectacular to be part of."

He also fondly remembered his fellow actors, "Of course, the talent working on the film, it was great to be part of that family with Lea and Michael and Tom. Really great people." He said it's still one of his proudest career accomplishments, "I, of course, loved working with the Back to the Future movies. It's always a thrill to be with your friends and family at the premiere of a $50 million film that you're co-starring in. That's always very exciting."

These days Jeffrey has diversified and keeps many irons in the artistic fires. He is narrating a documentary about DeLoreans and is often a guest speaker at the DeLorean Owners club. This summer he is taking part in Living History Live in Sacramento, California, recreating the Gold Rush days of the 1850s. He commented, "I've written four snake oil salesman shows where I'm playing a medicine man. And I'm directing a lot of the street theater and events that are going on in this town which is frozen in time."

His latest independent film, Nobody's Laughing, premiered last week. He explained, "I play a gentleman, Mel, who only feels right when he's made up as a clown. So he goes out to restaurants and everywhere he goes he's made up as a clown and he feels that's his real soul, his real identity. And it causes some real problems, especially when his daughter wants to get married and wants to be walked down the aisle."

And in addition to his on-camera work, Jeffrey gives back by teaching and coaching. He noted, "I've been very fortunate, knock on wood, in my career and had a lot gifts from both providence and generous people. I've taught at Universities and private schools and films schools... I do a lot of seminars for actors on what it takes to get serious about your career and how to make it in Hollywood… And I also work with directors on communication on the set, how to get the best of actors on their terms... My way of giving back."

Still even though the actor pays his good fortune forward, he has been struck with bad times as of late. Jeffrey's wife Kim Jackson was diagnosed with brain cancer in October of 2010. And while the five tumors are no longer visible on her latest MRI, she still needs to undergo the remainder of her chemo regimen, including a 21-day hospital stay, in case there are still cells that MRI can’t detect.

Jeffrey recounted that Kim began suffering from migraine headaches several years ago. The pain was so debilitating that she missed a significant amount of work, causing her to lose her job — and subsequently her health care — which made the cancer diagnosis even that much harder to bear. The actor confessed, "The last seven months, I think I've aged probably about twelve years… It’s been a very hard road."

But there is a bright spot, Jeffrey pointed out, "Luckily though friends, right and left, have pulled together with prayers and great vibes and intentions and support and we're putting together a big fundraiser for her medical fund. It will take her a while to get back on the job market and all, so this will help cover her high co-pay and some of her living expenses."

On May 21 at the Glaser Center in Santa Rosa, California, Jeffrey and a bunch of actors, comics and singers will band together for “Tumor Be Gone!” a one-night performance to raise money for Kim. The notable guests include Michael McShane from Who's Line Is It Anyway?

on HBO and current star of Chaos on CBS. Also performing will be Perla Batalla, a Grammy-nominated singer who toured for years with Leonard Cohen. In addition many other local stand-ups, three improv groups and a few comedy music duets will take the stage.

Jeffrey also mentioned that his old friend and fellow castmate from Back to the Future, Claudia Wells (Marty McFly's girlfriend Jennifer Parker) will stop by. He's still waiting to hear back from other actors involved with the film but promised, "They'll be surprise guests." He noted, "Most of these are dear friends of ours who are stepping up to the plate to perform."

The couple thought a comedy show was appropriate as they contend that humor helped them through this ordeal. Jeffrey stated, "I'm naturally a very silly man and luckily that's kept her sane when things have looked pretty desperate, pretty scary."

A silent auction will be held during the event to raise additional funds. Items will include rare Back to the Future photographs signed by Michael J. Fox, Lea Thompson, Christopher Lloyd and Thomas Wilson. There will also be collectibles from Labyrinth

movies and more. Other auction items will include a five-week filmmaking course, a three-night stay in a log cabin and numerous theater tickets. For those who can’t attend the event, watch the Facebook page called "The Benefit and Silent Auction for Kimbell Jackson’s Health Fund." Items will be listed there in advance of May 21. The highest online bid will open the silent auction and if no one tops you, you'll take home the item.

Don’t miss "Tumor Be Gone!" on Saturday, May 21 at 8 p.m. at the Glaser Center, 547 Mendocino Avenue in Santa Rosa, California. Tickets are $30. For ticket or more information call Brown Paper Tickets at 1-800-838-3006 or visit their website. If you can't make the events you can donate to Kim's health fund via Paypal.com using the donation account of: jeffreyweissman@sbcglobal.net.