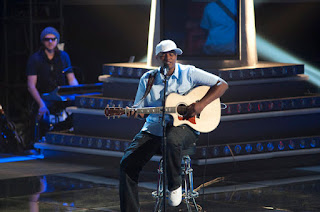 As The Voice heads into the battle rounds, frontrunners are beginning to emerge. One such leader appears to be Javier Colon. In the blind audition round the soulful father of two got all four judges to turn their big red chairs around just because of the sound of his singing. Ultimately he chose Adam Levine of Maroon Five to be his coach. In a recent conference call interview, Javier explained why he chose Adam, why he almost gave up on music and raising his game.

On Why He Chose Adam as His Coach
"I would have been absolutely ecstatic to have just one person turn around and then stay in the competition. But the fact that all four turned around, it was awesome. I was very flattered. And the reason that I picked Adam was because going into it, being the way the competition is set up, your coaches are the ones that keep you in the competition or they send you home for these first rounds. So if I was lucky enough to have my choice between several judges or coaches I wanted to make sure that I picked somebody that I thought was enthusiastic and really adamant about having me on their team. And Adam he was almost distracting me during the song because he was just so animated and so into the performance which really, really meant a lot to me and which is one of the main reasons that I chose him."

On Why He Almost Didn’t Audition
"The Thursday before the auditions in New York basically I woke up and I was not feeling very well... I woke up that morning and I almost had no voice. And I knew that the audition was on a Saturday. And I said, 'You know what, I don't think I'm going to be able to make it and I don't think I'm going to sound good. I don't want to go and make a fool of myself. So I'm just going to call my manager and ask him to see if there's any other day. But I'm probably I'm just going [to] cancel it because I don't think I'm going to sound good. I talked to him on Thursday… And he said, 'Okay if that's how you feel, then that's what I'll do.' So then Saturday came and I was actually feeling a lot better than I thought I would. And I called him and I said, 'Hey, listen don’t cancel that audition.' And he said, 'You know what? I completely forgot.' And I said, Well great then I'm just going to go.' So I flew in to Hartford, Connecticut and I drove to New York just in time for the audition."

On Why He Has Considered Leaving the Music Business
"I've been doing music for a long time. I did have a record deal with Capitol Records at one point. We released a couple albums with them that unfortunately it didn't work out and I ended up getting dropped. And I spent five years trying to get a new record deal. Nobody wanted to sit down with me. Nobody wanted to talk to the guy who basically already had a record deal and was unsuccessful… At this point I was running around doing a lot of college shows, doing some club shows and things like that. But there was times where it was getting really tight to where you couldn't pay bills and you had to borrow. You had to kind of maneuver to figure out how things were going to work. And when you have two kids that rely on you and your wife that relies on you too, to bring home some solid income… if I didn’t change something soon then basically I was going to have to leave it behind. Because as a father I would have to do anything that is necessary to make sure that my kids are taken care of because they're first and foremost. And this opportunity came along a month after another rejection from another record label that I thought we were going to sign with and it didn't work out. I’m very thankful for the opportunity… We'll see what happens but so far it's been great. And I'm hoping it means that I can continue to do music a little longer."

On Competing Against Friends
"You make some really strong friendships just being on the show. It makes it hard when you have to go into a battle round knowing that one of you is going to advance and one of you is going to go home. It's a very difficult situation. But after the battle round it goes to live shows where it does get to that point where basically America will be who they like and so forth. So I think it's the best of both worlds. It's really exciting TV to watch for sure. The tension is high and the emotions are just running rampant. So it's going to be exciting to watch for sure."

On His Arrangement of 'Time After Time'
"It definitely was an arrangement that I had been doing in my shows probably for the last year or so. And I definitely had heard other artists cover that song. There’s a great version that Sarah McLachlan does with Cyndi Lauper as a duet, which I heard that really, really spoke to me. It's very acoustic like I do it. Also there’s a wonderful artist named Eva Cassidy who also covered that song… [it's] also a great rendition of it. I definitely try to put my own spin on it in the way that I sing it. And the way that I play the chords and stuff is sometimes a little different. But I mean everything that I do for the most part or at least what I've been doing for the last five years or so has been very acoustic soul I guess is what I call it. And I put a little bit of how I sing into what I think is just a classic, classic, classic song that is just an amazing song."

On Raising His Game for the Battle Round
"Honestly, you have to have your game at a raised level basically at all times on this show. For the blind audition you had to go and give it your absolute 100%. And you also have to do the same in the battle rounds. If you basically don't give your 100% in either portion you could be going home. A lot’s being said about the battle rounds and how you're going against another person and it’s definitely a nerve-racking thing for sure. But the only thing that you can control is what you do on that stage and not necessarily what the other person is going to do on that stage. So you just have to really go out there and make sure that when you walk off the stage you feel good knowing that you gave your 100% and that you did everything that you could to do the best that you could. And that's really all that you can do."

See if Javier makes it through the battle round on The Voice on Tuesday nights at 10 p.m. EST/9 p.m. Central on NBC.