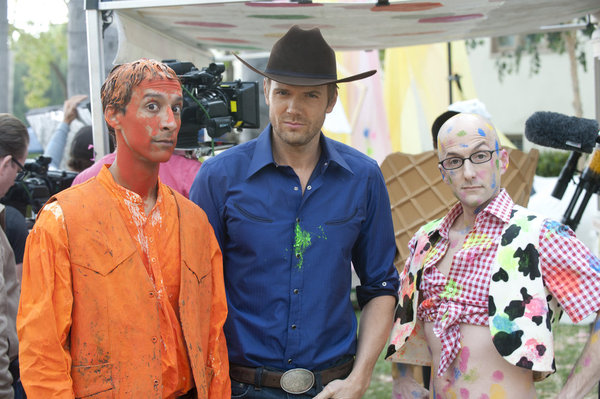 The second part of the season two finale of Community airs tonight. While the students at Greendale Community College battle it out in the ultimate paint ball challenge, we take a look at the best TV fights in history.

Community Paint Ball Battle
The finale is an amped up version of last season's closer with a not-so-friendly game of paintball. The end of the year western themed picnic turns into all out war in the fight against Pistol Patty's Storm Troopers for the $100,000 cash prize.


Modern Family Mud Slinging
In Modern Family's season one finale Claire finally gathered the entire Pritchett clan for the perfect family portrait. But her hopes were dashed as the photo session broke out into a raging mud slinging war.

took an out of the ordinary field trip away from the neighborhood bar. The cast erupted into an all out food fight hurling mashed potatoes, cranberry sauce and carrots across Carla's living room.


Brady Bunch Pie Throwing Shoot Out
They brought in Cousin Oliver to be the new precocious kid in the family as the first six Bradys got too old to be adorable. And he got his welcome to the clan with a pie in the face during the family trip to Hollywood. Watch it here.

I Love Lucy Grape Wars
In the grandmother of all TV food fights, Lucille Ball started it all with her grape stomping episode. The poor little Italian wine maker had no idea what she was up against when she hurled that first fistful of fruit at the queen of comedy.

For related stories check out:
The Community Cast Doesn't Always Get The Jokes
Yvette Nicole Brown and Malcolm-Jamal Warner on Community