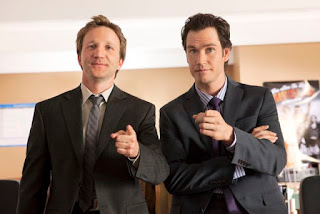 Before you decide you don’t have time in your TV viewing schedule for another legal drama, you might want to take a breath and give Franklin & Bash a try. The new TNT series stars Saved by the Bell

's Mark-Paul Gosselaar and Breckin Meyer as two street lawyers who join an uptight firm. And in the tradition of a few other legal dramedies, they bring humor to an otherwise dry format.


In a recent conference call interview Gosselaar commented, “We haven’t seen comedy in the courtroom in a while. Boston Legal

is probably the last one. Ally McBeal

is another one. L.A. Law

was a brilliant legal drama with elements of comedy. So that’s what sets it apart from what’s currently on television, as well as the relationship between the two guys.”

The two guys are Jared Franklin (Meyer) and Steven Bash (Gosselaar). Each actor described his co-star’s character. Meyer noted, “Mark-Paul’s character, Peter Bash, is fantastic with a jury. They love to swim in his baby blues and he’ll take them down whatever path he wants them to.” Gosselaar added that Bash “is an attorney who is confident, who is great in a courtroom. He’s an assassin in the courtroom. He knows how to be surgeon with the jury.”

While he described Franklin as “a public defender who wore his heart on his sleeve, was righteous. And he needed to be that way because of the environment that he was up against… He was always the underdog and in an environment where he thought the cards were stacked against him.” Meyer summed up his role saying, “Jared’s more like a dog going after a tennis ball in a bush, which is he’ll go head first and deal with the thorns later.”

As a result of their unorthodox approach, Franklin and Bash are bound to get into trouble time and time again on the show. So how far do the stars think they’ll be able to push the boundaries on the show? Meyer responded, “It has to dance the line. Bill Chais, one of our co-creators of the show was a public defender for many years, and we lean to Bill often when I say, ‘Look, I understand that this is fun and this is good for the show and it moves the story along, but can this happen?’ There’s a lot of, ‘Can this happen?’”

He cited an example that viewers will get to see in the first episode. “In the pilot, the girl taking off her shirt and revealing her bra — I said, ‘Bill, can it happen?’ And he says, ‘Yes, absolutely.’ And I said, ‘Well, what would happen to me?’ And he goes, ‘Exactly what’s happening. You’d be thrown in jail.’ So as long there are consequences, repercussions to our actions, I’m happy to have us take the unorthodox approach to the legal system.”

There’s only one place he hopes they don’t go. He remarked, “Getting disbarred, I think, would be too far. I think Jared and Peter’s philosophy is they will do anything possible to get their client off, and it means getting sent to jail, so be it.” He drew a comparison to a classic TV series to illustrate his point saying that the philosophy on M*A*S*H was “that everything’s funny but the war.” He felt his characters would draw a similar line, “With Jared and Peter, everything’s funny and fair game, except the case, and everything has a reason to it. It’s not just being silly in court because it’s fun… everything has a reason behind it, everything leads to getting our client exonerated.”

And that sounds just like the kind of no-holds-barred lawyer anyone would want to have on their side. As Meyer admitted, “Would I hire Franklin and Bash to represent me? It really depends on what I was arrested for, but I guess I absolutely would probably mostly out of curiosity just to see how they’re going to get me off… But yes, sure why not. I’d hire them.”

Irina Wering Takes Us Back to the Future