Give Some Love to Sad Keanu 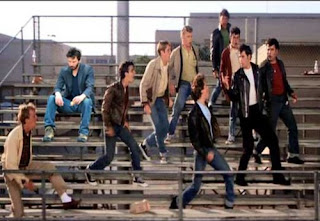 Image from Sad Keanu / Submitted by sad Brazilian
When you think of Keanu Reeves the image of a happy-go-lucky guy doesn’t necessarily spring to mind. In fact he usually comes off a little sullen. So it seems like it was just a matter of time before someone came up with a website dedicated to The Matrix star’s melancholy side.

That person is a 25-year-old graphic artist from Greece named Stella, who’s currently training to become an English teacher. And her tribute to Reeves is a site called SadKeanu.

In a recent interview she told us about her inspiration for the site, “I started this blog a couple days after the ‘bench pictures’ surfaced and people had already started Photoshopping them in various sites.” The snapshots she’s referring to are of Reeves dejectedly eating lunch in the SoHo area of New York.

Like many people at that moment in time, Stella was inspired to do something with the imagery. So she started to cut and paste Keanu from the original photo and drop him into other backgrounds. Among the locations you can find Sad Keanu are in a bumper car with President Obama and perched on the edge of a coffee cup. He was even, apparently, in Princess Beatrice’s hat at the Royal Wedding. Stella said her favorite is one in which he’s sitting on the front porch of the animated film Up. She thought, “Sad Keanu fit perfectly in that picture and I had such fun making it.”

The possibilities, it seems, are endless and the material deserves to be gathered in one place. Stella recounted the genesis of her site, “I initially started it as a place to post my own Photoshops which I did purely for fun. But it spread rather fast and its followers are the main source of submissions that are being posted now.”

Fans aren’t the only ones who are aware of Sad Keanu’s existence. Reeves was made aware of it on a recent trip to The View to promote his new movie Henry’s Crime with co-star James Caan. When Sherri Shepherd showed a few SHOTS of the star plopped down amongst a crowd of cats and on the bleachers in Grease, he seemed nonplussed.

Stella was thrilled by the reaction. She remarked, “I have to admit I'm quite pleased he's so nonchalant with this phenomenon. I've read previous interviews of his in which he says it's rather funny and he realizes it's done just for fun and I'm really glad he reacted this way.”

She hasn’t heard from the actor directly but said that’s okay. “I'm fine with it. That was never my intention.” Although she admitted, “I've always had a soft spot for Keanu.”

Mostly she’s just grateful for the support she’s received from her site’s many fans. She told us, “June 8 will be the first birthday of my Sad Keanu tumblr and I want to thank each and every one who has followed it and submitted a picture.” Celebrate the happy occasion by taking a spin around the Sad Keanu site.