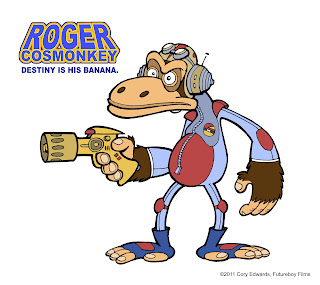 
Calling all monkey fans. We couldn't let this one pass by without pointing it out to you. Coming today to a hashtag near you, the first Twitter Series — Roger Cosmonkey. The ten narratives made up of 140 character tweets will tell the adventures of the primate launched into space in 1968 never to be heard from again. Until now.

) will be posting the story via Twitter @RealCoryEdwards using the hashtag #cosmonkey. On his blog he wrote, "I’ve had fun with Twitter, posting my goofy comments like everyone else. But I started to wonder if a complete story could be told with this new medium — a beginning, a middle and an end, with cliffhangers and everything."

He described the premise, "ROGER COSMONKEY begins in 1968 with NASA’s animal testing program… and it ends with a hyper-intelligent ape saving the world in 2011." Roger's story starts today with tweets and accompanying illustrations. Don't miss a single character.

For related stories check out:
Jane Austen Unites the World Via Twitter
Steve Martin Gets Wild and Crazy on Twitter