An Interview with Austin Andrews from The Biggest Loser 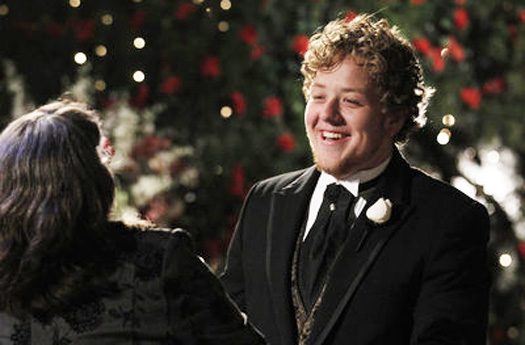 During a pretty intense weigh-in on last week's Biggest Loser the nail biting went on until the very last seconds. Would sisters Hannah and Olivia fall below the yellow line together causing one of them to leave the other behind on the ranch? Instead frontrunner Austin Andrews lost only one pound and was sent packing. We spoke with him about the fear of splitting up the girls, the moment he became a man and what he's doing to try to take the at-home prize.

On the Fear of Breaking Up the Sisters
"That night was so intense just because you’re looking at all of this around you. I, of course, would have been grateful that I would have been able to stay in the final four but at the same time I loved Olivia and Hannah and I love Irene and Jay. So we got to a place on the ranch where the five of us that were left — especially with having two weeks of just us doing our thing and everyone making it through makeover week — we didn’t want anyone to go home. We wanted there to be a final five, we didn’t want to see that happen. And so that night would have sucked no matter who went under. And the fact is that they came close and that they are in the final four is, I think, an incredible story and I’m really excited for them, the sisters. But, yes, it really would have sucked to send anyone home that night and I think it was unfortunate that it was me, but it would have been unfortunate no matter who went home."

On the Moment He Became a Man
"It came down to a moment with Justin. It was week four and we were on the ridge still, it was our last week on the ridge. We were working out in the field with Brett and we were doing an army crawl where you’d crawl about 15 feet, you’d stand up and you’ve have to punch a bag. And he paired us with other people from the teams we were training with. And so me and Justin were paired together and we were pushing one another and it was just this really intense kind of I would push him, he would push me and finally I started in part of that army crawl to start to checkout which is something that I had done in workouts previous where I would kind of glaze over, just go through the motions, I wasn’t really paying attention. And Justin saw it in my eyes."

"Justin had said something, he’s like, 'Don’t you dare check out of this. Don’t you dare give up. Don’t you dare let your eyes glaze over.' And I stood up, I finished it out really strong and it was that moment of like, 'Oh my gosh, what am I doing? Why would I let this moment be a moment where I’m not giving everything I have?' And it was that moment that I started to realize I have a power within me and I have the ability to stand up and really make a difference not only in myself but in those around me. And I started pushing him harder. The whole workout changed and really from that point on I really was able to start really pushing myself in a way I’ve never felt before in my life. So it was that moment that really triggered my first kind of ah-ha moment."

On Trying to Win the At-Home Prize
"I’m definitely in last chance workout. You’re just so much more focused when you’re in this mode of, 'This is it. This is the final time.' So for me I’ve been participating in a boot camp at the Muay Tai Gym that I train at. So that’s 5:30 a.m. workouts. And then I’m working with the trainer around nine in the morning and then I’m spinning in the afternoon usually one or two spin classes at a local gym here in Pasadena. So it’s been really honing in on the things that are huge factors in what helped my weight loss on the ranch and making those things work for me here at home… It’s crunch time for finale, but when it comes down to what’s going to be normal in life, it’s going to be that hour of running a day and a little bit of weight lifting."

On His Current Diet
"My diet's very similar to what it was on the ranch… I’ve got to say for me the majority of it’s counting the calories. I had - I got out of the practice when I first got home of counting calories and I actually saw my weight struggle a little bit when I first got home. And so I had to get back into counting. So it really came down to I’ve got to count my calories and my workouts… Personally, I’m staying right around 15 to 1800 [calories] because of how much I’m burning. And I’m still losing a little bit of weight with that. Calorie counting is going to be subject to the individual so it’s always a good idea talk to a physician."

On Cara and Brett's Inability to Train a Winner This Season
"The only reason I can give you for that is that Brett and Cara are two individuals that are incredible trainers but aren’t necessarily savvy to some of the game that is in The Biggest Loser. I’m trying to find the right words because there are ways to control your water week to week, there are ways to control your weight fluctuation that’s very natural. And unfortunately I don’t know if Brett and Cara knew those things coming into the show and so we weren’t able to grab those things until very late. One of the things that you’ll find, and this is why you’re told not to weigh-in every single day, your water fluctuates in your body week to week. And so day to day, just depending on how much you sweat, how much you intake, how much you’re peeing out, how much salt you have, how much potassium you have, all of it really can control how much water's in your body. Something that Jillian and Bob know really well is how to stabilize that and how to keep it consistent throughout the show. And they were very good at it. So there were little tricks that they knew from 11 seasons and Brett and Cara had to find it out the hard way this season. I don’t think it’s any kind of depiction of what kind of trainers anybody is on the show."

On What Has Changed the Most About Him
"I would definitely say the confidence is what I’ve seen change. And it’s actually something that I didn’t notice as much. It was something that everyone at home noticed when I went home for the at-home week, where we train at home in the mid-season. And then when I got home after week 19. Everyone has commented on the fact that I walk into rooms differently and I do. I attribute it to my experience on the ranch. To be able to find within yourself a value and find kind of a worthiness of not only the show itself but a worthiness of being healthy, a worthiness of being valuable to society and being valuable to the people around you. That’s something that really has changed how I walk into every room, how I step into every situation that I step into now and, yes, I really do attribute that kind of change and that mentality that’s different in me to my time on the ranch and to my time training with Brett and my time spent with like Justin and Moses."

On Taking a Cheat Day
"We do on the show and it’s an indulgence of quantity not necessarily awful foods. Don’t get me wrong, everyone’s going to have that little slice of brownie or something like that. But most of the time when we do a cheat day… we call it a high-calorie day, just have a little bit more of the quantity of the kind of food that we eat. So it just comes down to the quantity more than anything else."

On The Best Part of Losing Weight
"I cannot wait to hit up roller coasters. One of the worst experiences in my life was when I was a senior in high school and I showed up at Six Flags for the Senior Day and I could not ride one roller coaster with any of my friends. So I cannot wait to hit up a theme park. But when it comes to day-to-day living it’s things as simple as being able to take a walk with a special someone, being able to go on a hike, being able to go on a run, being able to go on a bike ride with people that I hang out with. And there’s a great lake just 20 minutes biking from my house and I would have to drive there and meet my friends who all biked there because I was so unfit before the show. And so now I get to participate in a lot of the activities that people that I love already participate in."

To see if Austin wins the at-home prize and who takes the big title, watch The Biggest Loser on Tuesday nights at 8 p.m. EST/7 p.m. Central on NBC.