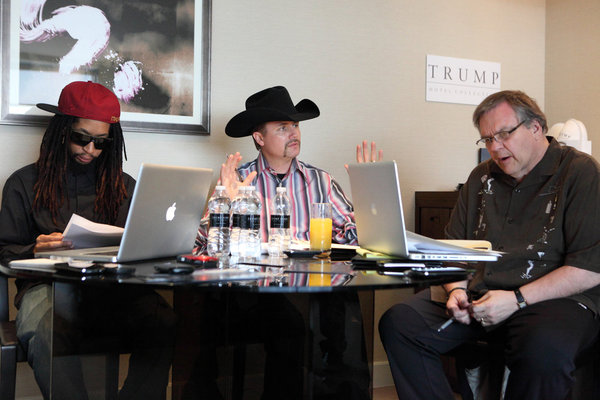 Some music stars are “Standing in the Storm” for their charities, a country singer opens her heart and dress rehearsal for people in need and a “Back to the Future” franchise star turns to friends for help. Here are this week’s most inspirational pop culture moments.

Anyone who’s been watching this season of The Celebrity Apprentice knows that the inspirational moments are coming amidst a steady stream of yelling and posturing. But in the middle of the swirling disharmony, three unlikely musicians have joined forces to benefit their favorite charities.

Three members of original Team Backbone, have made the final four and collaborated on the tune. The artists are combining their sensibilities from their individual disciplines. Meat Loaf is bringing the Rock, John Rich will provide the Country and Lil’ John will throw in a little Hip Hop. Their former teammate and pop star Mark McGrath, who was eliminated after task six, added his talents to the mix as well.

“Standing in the Storm” is a fitting title for a song born out of TV’s most tumultuous reality show. It sounds like a little something for everyone, and that’s good news for a few fortunate organizations. Proceeds from the song will go to the charities that each was representing on “The Celebrity Apprentice.”

Rich has been playing for St. Jude’s Children’s Research Hospital. Lil’ John has worked on behalf of The United Methodist Children's Home of the North GeorgiaConference. And Meat Loaf has emotionally displayed his commitment to ThePainted Turtle camp. McGrath did Celebrity Apprentice to raise funds for Savethe Music Foundation.

Prior to the finale the three superstars have already raised a combined total of almost $1 million for their charities. Check out The Celebrity Apprentice on Sunday night to see who makes the final two and takes home the title and download “Standing in the Storm” from iTunes.

To read the rest of this week's inspirational pop culture moments, visit beliefnet.com.
Posted by Pop Culture Passionistas at 1:02 PM