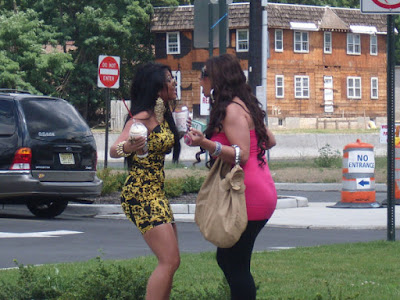 Photo by The Style Network

Everybody knows about the Jersey Shore, but have you ever swung by the other Garden State show — Jerseylicious? We hadn’t either. But at a recent press event our curiosity was peaked with executive producer Alex Duda did her best to keep the shows two stars, Tracy DiMarco and Olivia Blois Sharpe apart.

Alex described the reality throwdown for people who’ve never tuned in. “In general it's about a New Jersey hair salon in central Jersey in Green Brook and the people who work there. And we have a great cross-section of people. We have the young girls, like Tracy and Olivia and Gigi. Then on the other side of the spectrum, we have the owner Gayle, who is a 53-year-old woman who is reinventing her life, and her daughter, who's 31, who just had her own baby. Then we have Anthony, who is 39, going to be 40 this year, who is trying to have his second baby in season two.”

There’s also quite a bit of bickering. But as Duda was quick to point out, there’s only been one actual brawl between Tracy and Olivia about, what else, a guy. She recounted, ‘There was only one fight ever on the show that got a little bit more physical… For the most part we always tell them, ‘You're two girls who work together who don't like each other. That’s a universal thing.’ I’m sure everybody here has worked at a job where you've had to work with someone you didn't get along with. And that's a daily struggle for them. So I always remind them, ‘Use your words, not your fists.’ You have a disagreement, and it's ‘How can we have that disagreement and come to some kind of solution so they can keep working together?’ So we try our best to do that.”

Sometimes that’s easier said than done but as Tracy pointed out she’s still evolving. She admitted, “I used to fight everybody all the time because I just thought that growing up in Jersey, only the strong survive… I was the first one to go through high school, and it was a really rough high school to go through. I had to fight for my brothers and fight for me to make a name for ourselves.”

Now she dukes it out, verbally at least, with Olivia. But the girls do manage to get along when it matters. Tracy remarked, “We were talking to people all day, and they said like, ‘Oh, you guys aren't friends now?’ We’re like, ‘No.’ And they're like, ‘Oh, but you're not arguing. You're not fighting each other right now.’ I’m like, ‘Well, we can be professional. We can sit here. We just have nothing to say to each other.”

Look we didn’t say it was Shakespeare, but if you’re looking for a good distraction some Sunday night, check out the Jerseylicious action.

Jerseylicious returns to the Style Network on Sunday, May 15 at 8 p.m. EST/7 p.m. Central.

For more pop culture stories read:
The Sing Off Is Casting Season Three