An Interview with John Stamos and Neal Baer of Law & Order: SVU 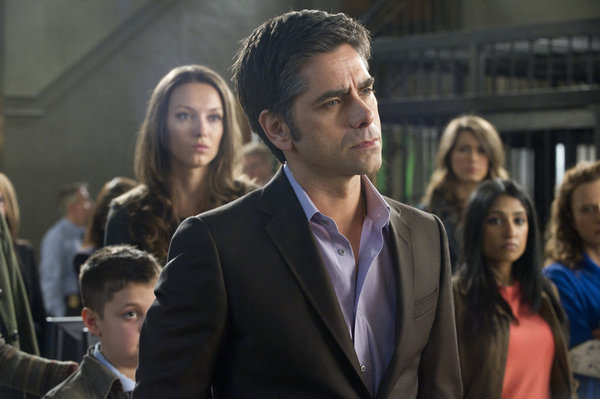 Tonight John Stamos will make a guest appearance on Law and Order: Special Victims Unit playing a character pretty out of the ordinary from his usual nice guy roles. His latest TV parts have included Carl the Dentist on Glee

and Dr. Tony Gates on ER

. But this time around he plays a charming, ladies man with a dark side. In a recent conference call interview the actor and the L&O executive producer Neal Baer talked about the episode and why John was perfect for the part.

In the episode called "Bang," John's character gets caught up in a case involving an abandoned baby. Neal explained, "John plays a very wealthy venture capitalist who is more than happy to help [in] the investigation because it turns out that he’s tied to the baby at the beginning, because he was having a thing with the baby’s nanny and the baby disappeared while he was in bed with the nanny."

John admitted, "What attracted me to this and also what, first of all, scared the hell out of me about playing this, he’s a reproductive abuser. And it’s really unlike any character I’ve ever seen or read anywhere. He basically loves children so much so that he manipulates these women and gets them pregnant most of the time without them knowing, poking holes in condoms and basically again, manipulating them to have children. I think he loves children. It’s part of his desire to procreate, have more of him in the world. And I just found it so fascinating."

Ironically the day John got the script for SVU he was planning an event for his charity Project Cuddle — an organization dedicated to erasing child abandonment. So he recalled thinking, "I can’t do this role. This makes no sense for someone like me." He continued, "I think what happens is you get so caught up in being a celebrity these days. And you forget why you’re a celebrity. And it’s really because you’re an actor. And roles like this that scare you are really where I should be going with my career. And so I jumped at the chance. And I think it’s really one of the best things I’ve ever done on television."

Neal interjected, "John is pretty amazing in it." He revealed that the role was actually created with John in mind. "We wanted someone who was completely charming, affable, very handsome, had a way with women that people could really connect to. And yet there was this side of him that was unexpected. And we liked that as well because we wanted to see him in the light maybe that he hasn’t been in on other shows. And so we often write the shows with people in mind. And sometimes we’re really lucky to get those actors. But it also helps us create the part because we just knew that this character had to be charming and handsome. If he was evil and nefarious then it wouldn’t have worked."

John agreed that the part was perfect for him. "It really is an interesting casting choice because you buy in to oh it’s me. It’s John Stamos. He’s sweet with the ladies and he’s charming and all of a sudden you find out that he’s an evil, deceptive man who is just out for very selfish reason and procreating and wanting more of his DNA in the world."

He described the genesis of the character, "It was odd because when I started playing it… Neal said I didn’t have to play all that stuff. I didn’t want to get caught up in being this nefarious weird evil man. I played into really loving children. When his finance finds out that he’s fathered 20 children in the beginning, she looks at him and he says, 'Well I told you I love babies.' And then at the end you find out that he’s actually fathered 47 children. And he says, 'I love each and every one of them with all my heart.' So as part of it you get bought into, 'Oh that’s John doing that but then it’s really truly the farthest thing that I’ve ever done on television or movies from who I really am."

Neal added, "We always felt for the audience if you didn’t like him from the beginning then you just would be like you don’t like him and then you’re not taken on this journey. But because it’s fun you… just go wait a minute what? He said that? And yet he seems so true about what he’s saying."

Stamos said this dichotomy was the difficulty he faced in playing the role. He remarked, "It was a challenge to not play into the stereotypical things that maybe someone would read into a character like this. I played them very laid back and very confident and very controlled and just kept what he wanted, which was to procreate and have as many children as he can because he loved babies, loved himself. So the challenge was to keep it very clean."

Of course John had a stellar cast to play off of in the Law & Order: SVU regulars. He commented, "I’ve been doing a lot of guest spots — Entourage and Glee. So there’s always an extra challenge in it. But the benefit is that the shows are up and going and they’re running well. And there’s not really a lot to learn. These shows work at a different pace and at different energy. And this particular one, these guys were pros. And again I did some of my favorite work on the show because of how good Chris and Mariska are."

He recounted, "I did a scene with Chris that was one of the favorite scenes I’ve ever done. It was like just playing cat and mouse. And this guy was throwing hard balls at me the whole scene. And I really had to be on my toes. So it did kind of spit me out as a more confident actor."