Our Visit to America's Next Great Restaurant 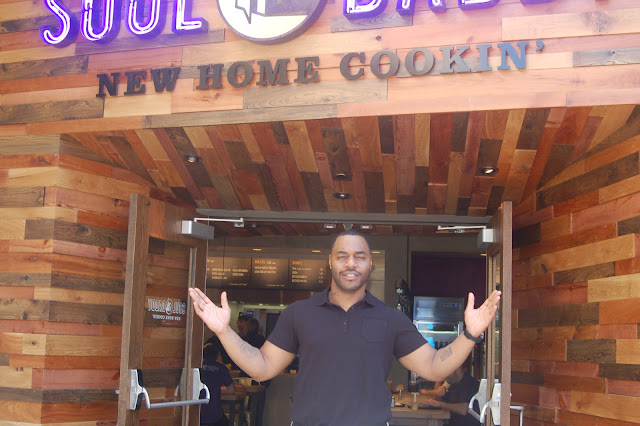 We were big fans of the recent reality TV show America's Next Great Restaurant and were sad to see it end this past Sunday. But the best thing about the series is, it's the gift that keeps on giving. Because at the end of the road the winner received a restaurant chain with three locations, New York, Minneapolis and right here in Los Angeles. And so even before we knew who took top prize, we planned a pilgrimage to the eatery's opening day festivities on Monday morning.

It turns out our top choice was also the favorite of the judges — Bobby Flay, Curtis Stone, Lorena Garcia and Steve Ells. Soul Daddy was triumphant over Spice Coast and the Brooklyn Meatball Company. Creator Jamawn Woods started out his career running a chicken and waffles catering company out of his apartment and now he's a restaurateur. We were dying to try his "new home cooking."

And so Monday morning we drove over to the Hollywood and Highland complex ready to fight off the crowds gathering outside of Soul Daddy. When we arrived we were a little baffled. No big crowds, no giant ribbon for a cutting ceremony, no Curtis Stone patting his new partner on the back. Perhaps the low turnout was due to the fact that the episode announcing the grand opening was pre-empted on the West Coast by President Obama's speech revealing that Osama Bin Laden had been killed. But in spite of low attendance, what did await us were some really good eats and a nice chat with co-owner Jamawn Woods. 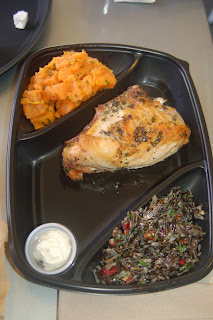 
We sampled the moist and juicy baked herb chicken (looks like Curtis won out over Bobby in the fried vs. baked war) with a yummy wild rice dish and the delicious sweet potato salad. There was no way to choose between just one bread, whole wheat biscuits or corn bread waffles, so we got one of each and did not regret the decision. All in all the food was flavorful, but light. It was reminiscent of the soul food flavors without being too heavy or overwhelming. The menu certainly seemed to do exactly what the celebrity chef investors had hoped for — deliver accessible Southern cooking with a healthy spin.

With our tummies full, we could now sit down and talk to Jamawn on the birthday of his new babies. He told us that he came up with the idea for Soul Daddy because, "A lot of American's like soul food but they shy away from it because it’s so unhealthy." So he said he wanted to "show America you can eat soul food, every day if you want it, if you put a healthy twist on it."

He came to this conclusion and then arrived at many of the menu items while on the TV series with the help of the show's judges. He also expressed that the best advice he got from these new business partners was, "Be yourself… Your restaurant has to represent you."

Jamawn has succeeded in that task. Soul Daddy was warm and welcoming just like it's owner. He seemed like a genuinely nice guy. We're rooting for him and his business to flourish.


Check out our other videos of our conversation with Jamawn.

You can visit a Soul Daddy in Los Angeles at Hollywood and Highland Center, in New York at South Street Seaport and in Minneapolis at the Mall of America.