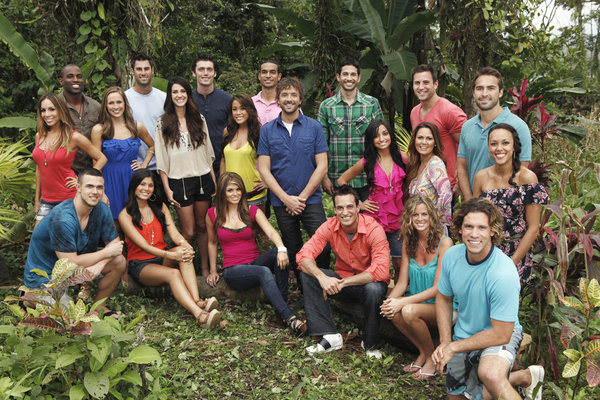 Love in the Wild sounds like the perfect knew reality show to addicts like us — Survivor meets the Bachelor. Who could ask for anything more? At a recent press event executive producer Tom Shelly and the Chairman of Endemol North America, David Goldberg, talked about how the series came to be and why it might just have a greater success rate than its competitors.

Shelly described the origins of the concept, “We went after real professional people, who were unlucky in love and were really looking for relationships. And we liked the idea of putting them under pressure that's above and beyond real life but putting them through, not a speed dating, but a speed life course in dating and… putting them in pressure when they are really looking for love. Can they find love in the outdoors with a little bit of that thematic idea that you always see in movies where a man and a woman are put under extreme pressure in the outdoors and in the jungles and in the wilds and ultimately they fall in love? And we wanted to put that experiment to the test to see if it would really happen. And we found that it actually did happen for quite of few of our couples.”

Goldberg talked a bit about the contestants saying, “The people on this show are real people. They are people that have regular jobs. They are firemen. They are policemen. They are lawyers. They are doctors. And in many cases they aren't your typical reality contestants, who just want to come on these shows and rip off their clothes and show their bodies and get their 15 minutes of fame.”

He added, “The unique part about the cast of this show are they legitimately have had months and years of not being able to find people they connect to. And they saw this as an opportunity to come on a show and go through this adventure and legitimately see if they could find a soul mate.”

Goldberg noted that the series already has a success rate to rival the more established Bachelor franchise. “It's interesting to note that we think three or four of these couples are legitimate couples long-term.” Shelly concurred, “We have already had requests from some of the couples that is it okay if we keep seeing each other… before the show airs. For a lot of these shows, these dating shows, there were absolutely genuine connections formed on this.”

Goldberg explained why he thought genuine relationships formed during the romantic adventure series. “It's just like it is in the real life. You've got somebody that you're interested in and all of a sudden you find out that somebody else is more interested in them. There are many, many parallels between the way things happen in the real world and the way things happen in this show, and that was really what we were going after. We wanted to find parallels between dating in the real world and dating in the jungle.”

Adding extreme challenges into the mix only heightened the connections according to Goldberg who said, “We were able to put them in very kind of stressful, very challenging situations that are like the things that we have to deal with in real life. And the quest was to see if you put them in those situations do they actually make it through that and do they actually find a bond. Anybody can go on vacation and live sort of a fantasy life and fall in love. The question is after that happens, what happens? I think this show will show that having gone through that they know what their partner is going to be like in those situations.”

Goldberg noted that Love in the Wild is ushering in a new era in the reality experience. “This is a romantic comedy that I think just about anybody who is single and looking for a serious relationship would want to come on and do this. I mean, you're in Costa Rica. You're experiencing these incredibly beautiful scenes and locations, and you're legitimately looking for somebody and it's not like when the show is over the relationship is over. If you're really looking for love, this is the show to be on.”

And if you’re looking for a new kind of romantic reality show, it’s the one to watch. Tune in to Love in the Wild when it debuts on Wednesday, June 29 at 10 p.m. EST/9 p.m. Central on NBC.