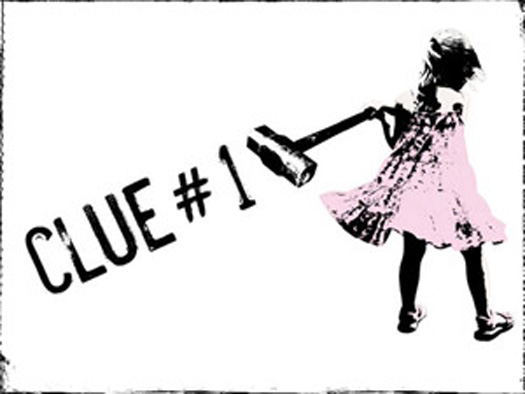 Next week the new series Switched at Birth premieres on ABC Family. In anticipation of the show's debut the network has launched an online scavenger hunt with a $4,000 cash prize.

As the name implies Switched at Birth tells the story of two girls, Bay Kennish and Daphne Vasquez, who were given to the wrong families when they were born. Now teenagers they have discovered the mistake and are learning to live with the consequences. The game centers around the character of Bay, who is a street artist. Her stencil art (pictured above) has been posted all over the Internet and players needs to find the pink tags and unscramble the code.

To play simply log on to www.abcfamily.com/switchedatbirthgame. Starting May 31 the site will post to clues each day pointing to the sites where Bay's stencil can be found. Each tag will contain two letters. The first person to collect all 20 letters, unscramble the code and post it on ABCFamily.com will win the $4,000 prize. Plus once you find the tags you can scan them with your SmartPhone to access videos, photos and scripts from the show.

And be sure to tune into Switched at Birth starting Monday, June 6 at 9 p.m. EST/ 8 p.m. Central on ABCFamily. It stars newcomer Katie LeClerc as Daphne, Vanessa Marano from Gilmore Girls

) and Lea Thompson (Back to the Future

and Caroline in the City

Good luck on the hunt!