Our Predictions for the Platinum Hit Season 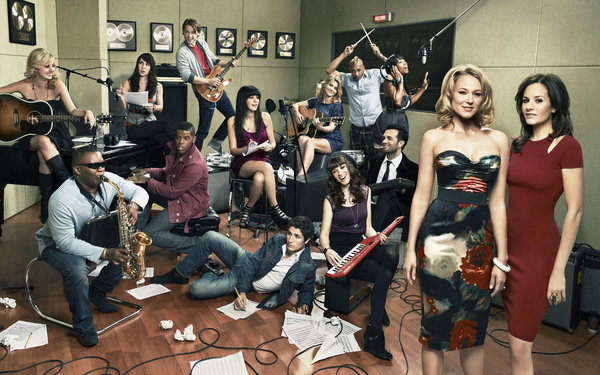 Platinum Hit, Bravo's newest reality show, debuted this week. This time producers are looking for the next great songwriter. They've chosen 12 upcoming composers, who will take the viewer on the journey to explore the creative process. The winner will get $100,000 in cash, a publishing deal with Sony and BMI Songwriters The Writing Camp and a record deal with RCA/Jive. The rest will be sent home one by one. Based on the premiere we are making our predictions for the order of their elimination.

In the first hook challenge the contestants had 30 minutes to come up with a full chorus about the city of Los Angeles. Four of them were selected by judges Jewel and Kara Dioguardi as the best of the group. These four then got to select their teams from the remaining contestants, who would turn their hook into a fleshed out song.

We realized one really important thing while watching the first episode. Man, songwriting taste is really subjective. Our choices were 100% opposite of what the judges liked. This, of course, made our predictions for the rest of the season pretty impossible. Our list is based partly on following our heart, but as good reality TV junkies we were forced to take into account the perceived judges favorites.

WEEK ONE: Nevin James
Nevin was the first to go home in week one. And although we did not get our pick out in advance of the episode, based on his "Candle in the Wind" inspired hook, we had placed him in the bottom of the pack long before judges Jewel and Kara sent him packing.

WEEK TWO: Melissa Rapp
Melissa survived this week based on the luck of the draw. Landing on Jackie's team gave her a free pass, even though she didn't even seem to play during the performance. If we were judging only on the merit of her botched hook challenge, where she stopped after singing only two words, she might have been the first to go. We like the ukulele vibe, but we think she'll be eaten up by the competition.

WEEK THREE: Karen Waldrup
Karen got lost in the hook round with her "Southern Spice" theme. Although we like her blusey/country feel, her weak melody and  confusing lyrics don't bode well for her future on Platinum Hit.

WEEK FOUR: Jes Hudak
Jes, all we can say is, "fake it, take it, make it." Really? That's the best you got? Seems like she graduated from the "Moon in June" school of songwriting and might be heading home soon while we croon her tune until noon.

WEEK FIVE: Amber Ojeda
We enjoyed Amber's jazzy "LA with Me Tonight" hook, but the mousy songwriter needs to step up her game and stand up to the bullies like Sonyae if she expects to stick around for any length of time.

WEEK SIX: Sonyae Elise
If there were no judges influencing our choices, our money would have been put on Sonyae being the first to go. But the screeching and non-sensical lyrics we heard in the hook challenge translated into beautiful music to Jewel and Kara. Like we said earlier, there's no accounting for taste. At least they admited that the final song was "trite, confusing and unmemorable." But all good reality TV needs a villain and Sonyae is your Omarosa, so expect to see her around for a while.

WEEK SEVEN: Johnny Marnell
We placed Johnny in the middle of the pack because we thought "Lost in Los Angeles" was a good hook — clever and emotional. The brooding indie singer type just might be the dark horse in the competition and his guitar playing took Jackie's song to great heights during the second challenge this week.

WEEK EIGHT: Brian Judah
OK, he's a bit of an odd duck, who compares himself to Elvis. But that aside, his hook "Make you a believer in the city of make believe" was one of our favorite choruses. We like his rocker edge and his whole vibe. He didn't contribute enough to Scotty's song this week and found himself in the bottom two, but we have faith he'll redeem himself.

WEEK NINE: Blessing Offor
This Motown-style crooner belted out a haunting melody in the hook challenge but was overshadowed by Sonyae during the group section. It's difficult to say what will come from him down the line, but we look forward to finding out.

WEEK TEN: Nick Nittoli
If we were just going on personal taste, Nick would be the second one off the show, right after Miss Diva Sonyae. We just don't get it. And we may not be poetry experts but we're pretty sure "L.A." and "City" don't rhyme. We'd like to see him go, but he's the judges' darling, taking second place in the hook challenge and winning the main competition. And so sadly we predict we'll be listening to him talk about being he greatest thing since Michael Jackson until the bitter end.

RUNNER-UP: Jackie Tohn
Jackie placed fourth in the hook challenge and second in the song challenge. Her composition "City of Dreams" had a catchy chorus and a great Janis Joplin-esque quality to it. In our book, she's neck and neck with Scotty for first place.

WINNER: Scotty Granger
Scotty took third place in the hook challenge and ended up with what was our favorite song. The judges placed his tune dead last. We blame it on his teammates, Brian and Nevin for what the judges called "vapid and dull lyrics." We think Scotty has nice, soulful melodies that can take him all the way if he chooses his partners more carefully. 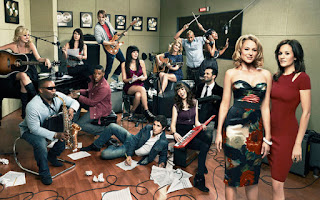