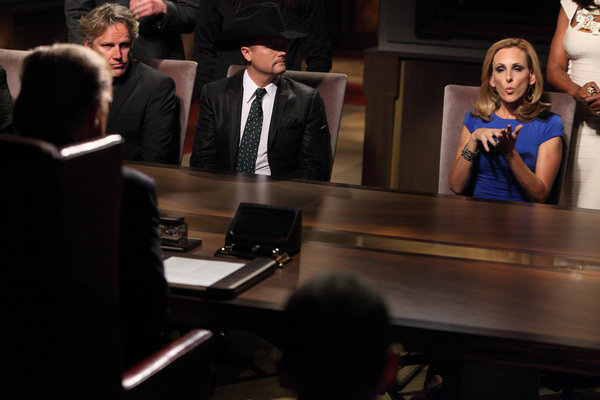 On Sunday night either country singer John Rich or Oscar-winner Marlee Matlin will become the next Celebrity Apprentice. Last week they started their final task, branding marketing and holding a big event for the launch of a new product 7UP Retro. And in usual reality TV fashion the producers brought back old players to help with the last project.

John Rich clearly ended up with the stronger team — Lil Jon, Mark McGrath and Star Jones — while Marlee chose Meat Loaf, Richard Hatch and, by the un-luck of the draw, La Toya Jackson. In a recent conference call interview Marlee admitted, "La Toya Jackson, in all honesty, was my last choice. It was a schoolyard pick, so I didn't have an [option]. I probably would have taken someone other than La Toya."

Before choosing the final teams Marlee was given the option of branding the beverage with either a '70s or '80s spin. She chose the '70s and explained why, "I understand '70s better than '80s. I grew up liking The Brady Bunch

. I looked forward to every day in the '70s in my neighborhood. And so I understood the icons in the '70s. I knew John would probably be better with '80s… So '80s makes more sense for him… I wanted to play to my strength as opposed to [his] weakness if it was '80s versus '70s, music versus sports." She also noted, "Me taking on a music task with me being deaf might take away from John's passion, which is music. I don't pretend. I don't like to play fake games. I want to play something that I am strong with. I wanted to accomplish that."

And she felt her teammates were best for her '70s assignment, "My choices were most appropriate for my task… Meat Loaf because he's an icon of the '70s… Richard Hatch, he was older and he certainly understood the '70s as well as I understood the '70s. And La Toya Jackson… she's a Jackson, and she knows all about performing. And she is all about the '70s. So all three members of my team certainly fit in to the advantage that I wanted to play in this game, and the '70s that I wanted to focus on to have a well rounded, good job eventually for the task I was given. So it was all about '70s for me. And these people all represented that decade as best as I could get it. So that's why I chose those people."

John also felt he ended up with a very strong team, but he came at his choices from a different angle. He remarked, "The number one thing on my mind was the beverage, 7UP. And as I'm looking at the folks we have to pick from, there's only one person in that group that I know for a fact has successfully marketed millions of dollars worth of beverages, and that's Lil Jon. Everybody knows about Crunk Juice and the stuff that he's done. I mean the guy has made untold money marketing beverages. And not only that, he's a great marketing mind in general. So I said, 'He's a no-brainer for the first pick for me.'"

He also stated, "Mark McGrath to me, he's kind of like a popcorn machine, just pop, pop, pop, pop, pop all the time, lots of energy, lots of ideas flying out really, really fast. And there's a frenzy about him that I like." And while he had not worked with Star in the past he noted, "I have obviously seen how Star Jones works when she's working against you. And I just had to believe that if Star Jones was working for you and with you, she could be unbelievably effective and could keep the team really focused, and really on our timeline, and really take out any of the guess work on what you're supposed to do and when you're supposed to do it." He added, "And I think I wound up with a really strong team."

One team member of John's was actually an acquaintance from before the show. He related that he knew Lil Jon from meeting him at an awards show five or six years earlier and that they had become friends. They would visit each other when traveling through their respective cities. John recalled that when he found out he was cast on the series, he reached out to his buddy to enlist him for future help, "When I decided I was going to go be on Celebrity Apprentice, I actually called Lil Jon — because he's one of the big stars that I'm friends with — to tell him I was going to be on a TV show and that I might need him to help me out with a task at some point, or a donation. And he started laughing and said, 'Too late, because I'm on the same show.'"

John commented that their collaborative teamwork has had positive affects on both of their fans. "It did feel like a very important relationship. Not only because Lil Jon and I are really great friends, but as an example to our two audiences that cowboys and rappers basically can get along... and work hard for charities and break down some of those stereotypes."

And because of this reaction, the "Two Johns" have teamed up musically as well. "There's actually a record coming out right now called Rich Rocks. And Lil Jon appears on that record as a guest artist and it's a really cool thing. I've had a huge response from all the country fans that are really liking Lil Jon, too. And from his side he tells me there's a lot of his fans that are starting to look at my music. It's just a great relationship all the way around."

Marlee interjected, "I was supposed to be a backup singer, but my schedule wouldn't [permit] it."

See who wins The Celebrity Apprentice on the live finale on Sunday, May 22 at 9 p.m. EST/8 p.m. Central on NBC.