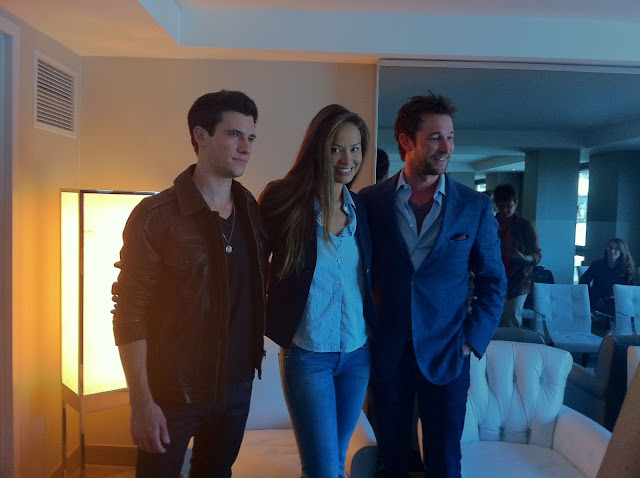 Falling Skies is the new sci-fi drama coming to TNT this spring. But this show comes with an extra bit of firepower. Not only is Steven Spielberg one of the creators, it also marks Noah Wyle’s return to series television. At a recent press event, Wyle joined co-stars Drew Roy and Moon Bloodgood and co-executive producer Mark Verheiden to talk about the epic alien invasion show.

Verheiden explained the premise of the series. “The idea sprung out of the idea [that] it’s almost like refighting the Revolutionary War in a way. [Wyle’s character] Tom Mason is a history professor, who knows a lot about the Revolution. So there was a bunch of rag tag guys in 1776, who fought against an incredibly stronger force in the British, and won. And now we have the same situation, considerably more dire I think. And so our guys are getting together and forming a resistance and trying to find a way to fight back.”

He added that there’s more to the battle than just the physical feuding. Falling Skies has deeper philosophical issues at its roots. “At the same time [the characters are] trying to hold on to the things that make them human… their family and their friends and the core things that make life worth living. It’s just not about hanging on by your fingernails and trying to kill aliens. It’s about how do we hold on to what we were and how can we get that again?”

The exploration of the interpersonal relationships is what drew Wyle to the series. He revealed, “That was pretty key from me wanting to be involved with it… We had the security of knowledge of knowing that the spaceships and aliens were going to be well taken care of given Mr. Spielberg’s involvement. So it became our responsibility to make sure that the level of continuity among the cast whether in terms of establishing a certain level of threat or tension or menace was consistent and that beat by beat and character to character we were playing the scenarios out in as close to and as realistically as possible.”


Bloodgood plays a pediatrician who lost her only child to the aliens. She recalled that part of that realism came under scrutiny during her medical related scenes. So did she learn anything from one of TV’s most famous doctors? She recounted how Wyle would tap into his E.R. knowledge to give her some tips, “It was so great because he gave me the tricks that make movie making what it is and still being believable as a doctor… He was helping me with CPR… because there’s a real guy there and I don’t want to press on his chest too hard. So [he showed me] how to use my hands in a way that was believable and use my knee to move the table and give it that full effect. Which was really effective. He’s smiling but he was on me and I was like, ‘Yes, sir.’”

For his part Wyle described the turmoil that his character is going through on the show. “My middle son has been kidnapped, as have a lot of adolescents, by the aliens and pressed into a slave work force. And the way that they are pressed into this service is through this harness, which is a biological attachment that fuses to the kids’ spines and basically turns them into a walking zombie, where they have sympathetic thoughts to the alien that’s in control.”

This adds a level of complexity far beyond most shoot ‘em up futuristic flicks. Wyle expounded on the dilemma, “Retrieving these kids has been something that we’ve been trying to do. De-harnessing them is something that we’ve been unsuccessful at doing. So it’s not just a question of rescuing him, it’s a question of de-harnessing him and then what are the long lasting effects of having worn the harness as long as he has. And what do we learn about the aliens through that process becomes a really pivotal turning point midway through the season.”

As with all well-scripted dramas Wyle and his co-stars will see significant growth in their characters throughout the first set of episodes. Drew Roy, who plays Wyle’s eldest son addressed his on-screen evolution, “Hal goes from just being this kid in the beginning to growing into a man by the end of the [season] through these different battles and women.” Wyle chimed in, “More the women than the battles.” Roy continued, “Having lost his brother and having this desire to get him back… going after that he learns a lot about himself. It makes him grow up a lot quicker.”

Wyle noted that his character will come to an important realization about himself. “When the pilot episode starts my guy is still very much an academic. He’s been living the life of an academic most of his adult life. And while he’s pretty well versed in military strategy and planning from a historical perspective, he feels that those are pretty soft skills to bring to the table in this moment of dire need. And as the body of the episodes go on he realizes that that’s actually a pretty good skill set to have because he’s bringing to it a contemplative nature of a teacher and a very extensive knowledge about military hierarchy and training and tactic. But he’s not really dogmatically adhered to either one so he’s able to fuse the two and create a new kind of leader, which is the idea of the warrior statesman.”

Playing this multifaceted character is only one of the reason that Wyle decided to return to series television after a two year absence. He joked about his true motivation, “Well truthfully, my kids are starting to get a little annoying… a little demanding. They want to talk and they want to eat.”

On a more serious note he divulged, “I actively stayed away from doing another TV show but I didn’t stay away from working. I have a theater company here in town that I redoubled my efforts with. And I took off and did some little parts in movies here and there but really wanted the bulk of my time to be spent being a presence in my kids’ lives.”

Luckily for fans, the television offers didn’t stop coming. Wyle acknowledged, “Michael Wright at TNT has been incredibly generous each year, showing me all the pilots he’s thinking about putting into production. And I read this one and weighted the ten episode time commitment against what had been a 24 episode time commitment and thought, ‘This may actually be perfect. This would afford me a chance to go off and scratch an itch and still have a quality of life at the same time.’ So I jumped at it.”

Add to that the fact that being a TV star doesn’t carry the stigma that it once did for an actor. Wiley conceded, “The paradigm has changed completely. Weekly I laugh that some actor’s on a new show that used to make fun of me for being on TV as he was off doing a film job. And now slowly they all come back ‘round.”

Catch Wyle as he comes back around when Falling Skies premieres on Sunday, June 19 at 9 p.m. EST/8 p.m. Central on TNT.
Posted by Pop Culture Passionistas at 9:00 PM