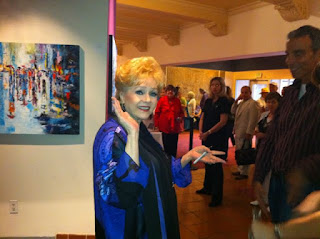 
When Debbie Reynolds was a little girl growing up in Burbank, California, no one would have dreamed that she’d not only be one of Hollywood’s biggest stars but one of the greatest archivists in entertainment history. But at 17 she was discovered by a local talent scout and entered into a glamour world in the golden age of movie making.

Over the last 60 plus years, Reynolds has amassed an unparalleled assemblage of movie memorabilia with the hopes of one day opening her own museum. That dream never became a reality and now the musical megastar is auctioning off her prized possessions on Saturday, June 18 at The PaleyCenter for Media in Beverly Hills.

In the catalog for the event, she explained how her obsession began, “My love for collecting began early in my MGM career. I used to spend my spare time in the wardrobe department, watching the most talented people create costumes for the actors. I was fascinated by how they were able to translate a simple suggestion in a script, sometimes even a piece of dialogue, into a magnificent costume. I loved everything that went into the process – the sketches, the fabrics, the construction.”

Reynolds started collecting costumes in earnest when MGM put all their assets on the chopping block in 1970. And she started to scoop up more memorabilia as other studios began to unload their goodies.

The Singin’ in the Rain

star had an obvious affinity toward wardrobe. As she said in the catalog, “There is magic in every thread, button and bow. Many of these wonderful articles capture that special moment in a film where our hearts were deeply touched. For me, the memory of this moment lives forever in each of these pieces.”

She seems to have preserved almost every important film costume including Rudolph Valentino’s matador suit from Blood and Sand, Marilyn Monroe’s white dress from The Seven Year Itch

and Judy Garland’s ruby slippers from The Wizard of Oz

Early comedy fans will appreciate the collection of caps including Harold Lloyd’s straw topper, Charlie Chaplin’s bowler and Chico’s top hat — the Marx brother’s chapeau even comes with a built in wig. Hopeless romantics might want to bid on Deborah Kerr’s black chiffon gown from An Affair to Remember or Elizabeth Taylor’s ceremonial headdress from Cleopatra.

While musical fans might go after Garland’s grey crepe dress from Meet Me in St. Louis

, Yul Brynner’s violet robe from The King and I

or Reynolds’ own lightning bolt, flapper dress from Singin’ in the Rain.

She has everything. Vintage movie cameras, Laurel and Hardy’s Model T Ford, Natalie Wood’s Van Nuys High School graduation dress (made for her by Warner Bros. wardrobe department), even a lock of Mary Pickford’s hair.

So now it’s her turn to auction off these treasures of Hollywood history. It’s a shame that these works of art are going to get scattered to the four winds, but hopefully people who respect the legacy of each piece will care for them as well as Debbie did.

For those that can’t make it to the auction or the previews, the downloadable PDF catalog is worth a gander — it’s like a 100 year movie marathon all rolled up into one tiny file. The auction is being run by Joe Maddalena’s Profiles in History and takes place on Saturday, June 18 at The Paley Center for Media in Beverly Hills at 465 North Beverly Drive in Beverly Hills.