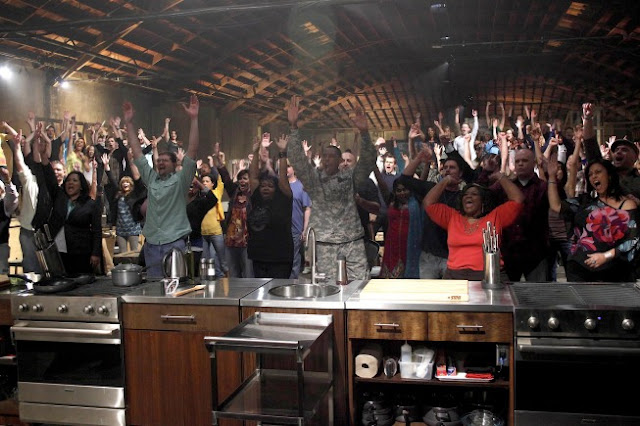 The competition is heating up on this season of MasterChef as Gordon Ramsay, Graham Elliot and Joe Bastianich search for a home cook who can turn out world-class dishes. In the mix on the final round of the competition was a teacher from Burbank, California.

46-year-old Edgardo Geronimo has a love of teaching and a passion for cooking. And the cameras were on site at his school as his kids wished him the best of luck. Edgardo cooked up a live Dungeness crab with mango cucumber salad. Chef Ramsay was impressed that Geronimo cooked the crustacean live. But the presentation, the meat served out of the crab’s shell, didn’t seem up to par with the preparation.

Edgardo seemed to know what he was doing. Not only did he clearly have skills in the kitchen, true to his career, he schooled Gordon and Joe in the biology of the crab. Neither master new that the crab fat is the first layer after you open the shell. They were impressed to learn something from the amateur cook.

Unfortunately passing on knowledge wasn’t enough to push Edgardo through to the next round. Bastianich loved Geronimo’s cooking saying, “I thought that was quite frankly kind of amazing. I think that the purity of the cooking technique of the crab, you have combined the essence of what lightness in crab can be. The crab is amazing.” He gave Edgardo a “big, big yes.”

Graham seemed to be on Geronimo’s side at first telling him, “To be able to take this and finesse more flavor out of the crab itself and concentrate that, it’s a very noble cause.” So it was surprising when his ultimate critique was negative. He added, “I think the crab, of course, is delicious and there’s such a purity there. But there’s not really a whole lot to it. There’s not really a dish.  There’s not a ton of different layers. To me it’s a no.”

Ramsay had to agree. Despite giving Geronimo “top marks for keeping it simple,” he cast the vote that sent Edgardo packing. Gordon summed the decision up by saying “MasterChef needs to see more, because it’s not about cooking a crab and putting it back in its shell with its natural juices.” Bastianich still wasn’t sold on the concept of sending the local teacher home and told his co-judges that he thought “they “made a mistake on that one.”

Tune in to MasterChef every Monday and Tuesday night at 8 p.m. EST/7 p.m. Central on Fox.

For related stories check out:
Our Favorite Foodies
Audition to Be on Masterchef with Gordon Ramsay