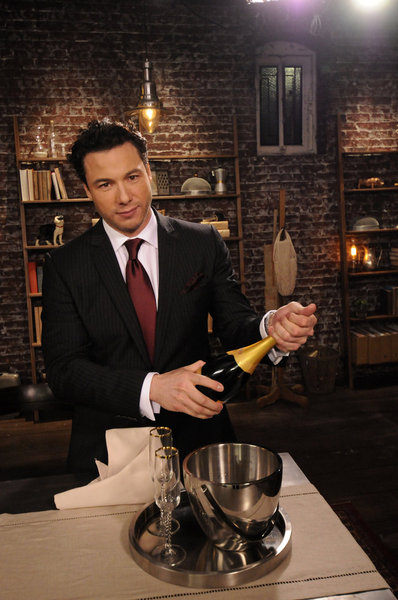 The last time Rocco DiSpirito had a primetime TV series he was opening a new establishment in front of the cameras on a show called The Restaurant. The underrated program didn’t last long and painted Rocco’s world as a very stressful place. Things are different this time around as Rocco gets other chefs in the kitchen and he gets to relax with special guests on Rocco’s Dinner Party. DiSpirito admitted, “Yeah. I'm having a lot more fun on this one. That's for sure. And I very smartly left the cooking to other people.”Rocco explained the premise of the show. He started with the first challenge saying, “Three chefs show up in my kitchen, and I ask them to cook their signature dish. I give them 30 minutes to do it. They know that they’re going to be cooking, so they bring their handpicked ingredients with them.”What the contestants don’t know is that Rocco’s selection criteria is different than that of a normal cooking show. He remarked, “They think it's based on the flavor of their signature dishes, but really what I'm looking for is a kind of personality that I know will share a value with me, that making people happy is the most important thing. Because as a chef, that's what our jobs are. Our jobs are to make people happy.”Searching for attitude as well as cooking chops has lead to some unique circumstances on Rocco’s Dinner Party. “There have been some interesting situations where I had to evaluate a person's value system more than their cooking skill, and I had to make a choice of, ‘Is their intention the right kind of intention? Are they going to do a really good job of taking care of my guests?’ even though I thought the cooking could be a little bit better. So I do struggle sometimes with those decisions on the show as well, and you'll see me make those evaluations.”This blend of culinary talent and the right attitude is something that Rocco thinks is lacking on a lot of television shows. He observed, “What we see on TV a lot is cooking surgically removed from the context of why we cook. We know how to cook. We watch a lot of people teach us how to cook, but why do you cook? You cook so that you can sit around a table and hopefully give yourself permission to have fun.”That leads to round two on the show where the ante is upped for the surviving chefs. Rocco descried the next phase, “Then the second one are the two consecutive, competing dinner parties. And they have to come up with food, wine, service, decor, all of it. It's all up to them. And we give them essentially unlimited resources. Anything they want, we find it.”Pleasing the diners seems to be paramount to Rocco, who noted, “When you invite people into your home, there's an implicit contract that you've made that you're going to show them a good time, right? So if showing them a good time and creating an environment where people give themselves permission to have fun, which is what you’re supposed to do at a dinner party, means that you have to put your creative force aside, then that's what has to happen. Because we’ve had guests come in and say, ‘By the way, I don't eat pork, fish. I don't drink alcohol. No cheese, no dairy, no this, no that.’”But when all the dishes are cleared off the table, that’s when Rocco feels all the people pleasing was worth the work. He confessed, “It's always such a privilege at the end of a service, when you're a professional chef, to meet the people who you've cooked for.”Of course Rocco likes being a guest, too. He joked, “I love going to dinner parties, so if anyone is debating it, please invite me.”And he’s gone to some real doosies to. Take for example an upcoming soiree on his new show. Rocco recalled of the event, “One of the most wonderful dinner parties I've ever been to was Liza's 65th birthday party. That's for sure. I couldn’t believe I was sitting at that table, listening to those stories.”But he’s attended some pretty stellar bashes off camera too. He recounted his favorite outing. “There was one Cirque du Soleil-themed dinner party that I remember pretty vividly… The Cirque du Soleil people are very interesting and very memorable, and they didn't leave that on the stage. Let's just put it that way. They brought it to their celebration.”Attend Rocco’s Dinner Party when it premieres tonight at 11 p.m. PST/10 p.m. Central on Bravo. For more pop culture stories check out:

Glee Season 2 Premiere Lives Up to the Hype