Some Thoughts from Bobby Kennedy, Jr. About the Environment 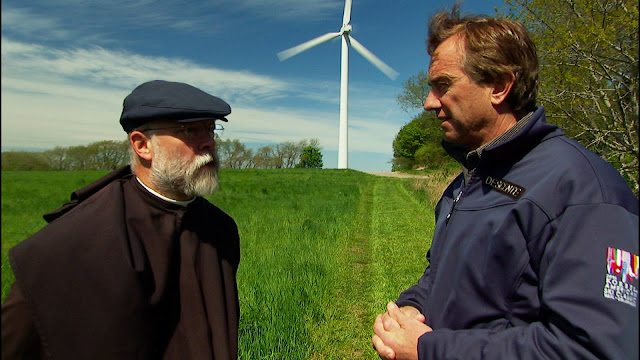 The Last Mountain, a documentary by Bill Haney about the destruction of the Appalachians by coal companies, opens in Los Angeles on June 15. It shines a light on the people of Coal River Mountain, West Virginia, who are battling against Masse Energy to stop a practice called Mountain Top Removal. Rather than mine for the coal, Masse simply blows the top off the mountain to access the fuel. Robert F. Kennedy, Jr. has been a powerful ally for the people of the region in their fight against the destructive and deadly method. Bobby shared a few thoughts on his early intro to environmental issues through his uncle Jack, the relationship of the environment to the decline of democracy and what it will take to get make real change.

On Meeting JFK as a Concerned Boy
"I was interested in the environment from when I was a little kid... When I was eight years old, I wrote my uncle, who was then in the White House, and there was pollution along K Street in Washington D.C., because there was a number of cement factories there. And to me the pollution seemed like a kind of a theft that day because somebody could steal the air from their neighbors and pollute it and make people sick, [it] seemed like a theft to me. So I wrote my uncle a letter saying that I wanted to meet with him about pollution and that I was going to write a book about it. And he wrote me back and asked me to the Oval Office. So I had a meeting with him in the Oval Office about that. I went in my shorty shorts and I brought him a salamander, that I had caught the night before, in a vase. I think I killed the salamander with chlorine from the water. It was a big spotted salamander. It was his observation that the salamander did not look well and we went and released him in the rose garden… I didn't get around to writing a book until I was 29 years old... but he set up interviews with Stewart Udall, who was the Secretary of the Interior, and a number of the other environmental ministers."

On His Philosophy that Pollution is Theft
"I've always seen pollution as an act of theft… The Constitution of every state, including the state of California, says that… those assets that are not susceptible to private property ownership but by their nature are the property of the entire community — the air, the water, the wildlife, the fisheries, the wandering animals, the beaches, the shorelines, the wetlands — these things belong to the people. Whether you're rich or poor, humble or noble, black or white, young or old, you have an absolute right to go out to the waterway and take out the fish. You have a right to go surfing without coming out with an ear infection. And those rights are being stolen from people of the state. They are being stolen by powerful political entities within the state, who break the law, violate the law, in order to privatize public trust assets… I have three children with asthma and they get sick on bad air days, when there's ozone imparticulates in the atmosphere. And somebody is literally making money by privatizing the air in their lungs."

On the First Earth Day
"On Earth Day 1970, 20 million people came out into the street, inspired by Rachel Carson's book [Silent Spring

]. Ten percent of the population of our country, the largest public demonstration in American history, demanded our political leaders return to the American people the ancient environmental rights that had been stolen from over the previous 80 years since the industrial revolution… So it wasn't a bunch of hippies in tie-dyed t-shirts making up a new set of laws. They were just reenacting old laws that had always been there. And those are the laws that we operate with today. They are ancient laws that are part of ancient history. They are central values of government and democracy, that the core responsibility of a government is to protect the commons on behalf of all the people."

On the Destruction of Democracy
"The issues that come up with coal, are all of the issues that you see when you see large scale environmental injury. You also see the destruction of democracy. You'll see the disappearance of public participation at the local level, so the public can no longer participate in the decisions about where their public trust resources are allocated — air, water, wildlife, fisheries, public lands are allocated. You'll see the disappearance of transparency. Things are done in secret. As a key foundation stone of government you'll see the capture of the agencies that are supposed to protect Americans from pollution. They become sock puppets for the industries that they are supposed to regulate."

On the Destruction of the Environment
"There's a scene in the movie where a small group of local activists tries to do a demonstration in front of the [Department of Environmental Protection]. Well if you look very carefully they are put off in a distant corner of the parking lot. And they're surrounded by all kinds of barriers that were erected by the police to stop them from actually getting anywhere near to the offices that they're boycotting. Then you have a line of police around them to make sure nobody crosses that barrier. And then behind the police you have several thousand private miners who've been invited in by Masse Coal to give that final concentric ring of protection around the agency. And it says a lot about the agency because it's saying the real alliance with the agency, is the coal industry and that the enemy are environmentalists who want to clean up the coal industry... And that's the classic destruction of the environment, the coalition between government and corporate power. It's the classic combination that every visionary leader in America's history has warned us against."

On How Change Will Happen
"We need an independent press, a courageous press, that is willing to speak up, stand up and speak truth to power, and that doesn't get distracted by entertainment news [like] Britney Spears' slow emotional decline, and talks about that issues that we need to understand to make rational decisions in our democracy. And we need a public that is informed... that is [capable] of recognizing all the milestones of tyranny."

The Last Mountain, written, directed and produced by Bill Haney, premieres on June 15 in select theaters in Los Angeles and is currently playing in New York City.

For related stories check out:
Truth in Advertising: If Movie Posters Told the Truth
A Set Visit with the Cast and Crew of Elevator