Danny Glover Talks About Age of the Dragons 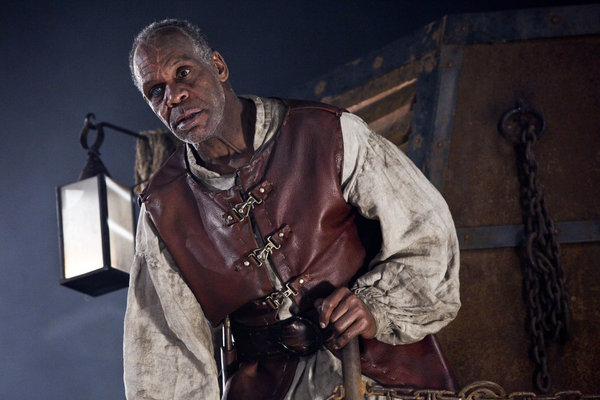 Saturday night marks the U.S. premiere on the Syfy channel of a film previously released in the U.K. starring Danny Glover. Age of the Dragons is a reimaging of the story of Captain Ahab and Moby Dick. Danny plays a version of the great tragic sea captain set in a mythical time, but rather than pursuing a whale he is chasing a dragon. In a recent conference call interview the Lethal Weapon

actor revealed that although the era and the physical beast are different, the emotional beast is the same.

He recalled that the character of Ahab intrigued him, "[He's] kind of deformed, mad. [He] was not only deformed physically, but deformed emotionally, and some of those characters within stories themselves are really dynamic to me… He's defined to some sense by his physical appearance of this deformity, but there's another emotional deformity as well."


He said what appealed to him was the "fear [and] guilt — all those things of my part that I'm allowed to explore in this role." He continued, "[It was] the idea of not simply just playing someone who is physically torn apart, the idea of it is [the] emotional part of it, which is what really attracted me to it, the idea of the emotional torture as opposed to the physical."

Danny remarked his challenge as an actor playing Ahab was two-fold. "[It was] the combination of the two things. [There was] certainly the physical part and finding the physical language for the character… And [also] the emotional language behind that… all the fear that is masked by the ugliness of the physical scar… His authoritativeness comes from somewhere else that is centered [in] his emotional pain."

He noted that while creating the character he concentrated on these two origins of Ahab's pain. He sought revenge on a dragon, which has killed his family and maimed him. Danny recounted,  "Always hiding his emotional pain is the one thing that I focus on and… there's that physical danger of the beast itself. And trying to find it the deeper part of his emotional pain beyond the scars that were left from not only this attack on him as well as the scars left by the fact that his sibling had been murdered by the beast… He is his own fear and his own pain."

Danny was also up against the task of remaking a beloved classic. "It's such a great tragedy of man against nature, of man against beast, of man against himself… He isn't conquered by the beast, it's the beast in himself basically and that's what man is always having to deal with, the beast himself… that part of him where he teeters on the edge of madness and sanity or stability and chaos… And great classics come out of that."

He added, "So whenever you're trying to remake them or reconfigure them in some way, it's always interesting. You find it in every single a classic, every single one. Whatever generation you put Macbeth in, it still works because [of] the same human emotion. It could be… its own period in time, or it can be in a modern time, it all works. The same emotions come up there. So I think trying to find the connection between those emotions, that humanness in it. That human frailty is a challenge."

Watch Danny Glover in Age of the Dragons of the Syfy channel Saturday, July 30 at 9 p.m. EST/8.p.m. Central.

For related stories check out:
An Interview with Haven's Emily Rose and Syfy's Mark Stern
Tiffany and Debbie Gibson — Giving the People What They Want