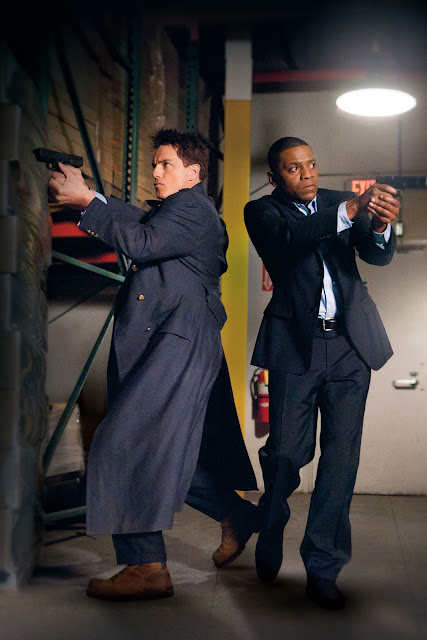 When asked during a conference call with his series’ stars and multiple bloggers why he decided to broach the theme of life without death, Russell joked, “I just wanted to write something that would put me first in a conference call ahead of these [lump] actors. It’s hilarious. Come on, we all find this conference call day funny.”

But then he addressed the question more seriously, “It was an old idea that’s been in my head for years, possibly about a decade or something because it’s kind of an old classical idea. It happens in medieval mythology and stuff like that, death taking time off and leaving the world and things like that. And I just thought it would fit Torchwood marvelously and that we would have ten hours to explore what would happen to the world, what would really happen to the world instead of making it like a fable or a fairy tale. So it was just kind of irresistible because Torchwood now is about big ideas. So that was the big idea.”

He explained how he brought the show from concept to series. “I had the idea for the story. We then got together with Jane Espenson and a man called Chris Chibnall who ran the first two years of Torchwood back in the UK. We beat that out into a 13-episode storyline and then we hawked that around various networks. You just go around pitching it and selling it. And we got a lot of interest from Fox initially who were lovely and charming and eventually went with something else. And then the second place we went calling was Starz. And they instantly liked it and we talked about the story.

He continued, “They had a slot for ten episodes as opposed to 13, which was fine actually (because we sent three episodes a packing). So they just went, the great lost episodes.
And so it was just a very healthy relationship from the start. So it was a lovely farce once we got to Starz. They really loved it. They wanted all the strong elements in it to be emphasized. They didn’t want it calmed down or toned down at all. And we were very quickly into production so it was a nice, happy experience. It was brilliant.”

Still bringing the series from the U.K. to the U.S. wasn’t without its challenges. He explained, “It was interesting for us coming across from Britain to America because in many ways it’s the same industry. You have scripts, you have actors, you have a camera. You get on with it and yet everything is slightly translated with a slightly different language. And even the lights have got slightly different names so sometimes even three months in you sit there and go what are you talking about to one of the sparks or grips or something. You don’t even know the names of the cranes any more. So just the language was a really, really odd thing in going from one country to another.”

He continued, “But as ever, the biggest challenge was the same challenge we always faced in Britain, which is realizing the ambition of the show. And I think we have done it. It’s a show we all of us, all the cast and everyone, wants to be bigger and better every week. We always start with a great episode and we want to build on that and there are very unexpected episodes to come that trips into history, great big, modern, epic scenarios. It’s just pushing it all the time, pushing ourselves to make it bigger, better and bolder and never relaxing. That’s the key to it really, just always pushing.”

Of course as Torchwood tackles major issues and starts to stand more on its own, it moves further away from the series that gave it life — Dr. Who. Russell addressed whether or not their newfound independence makes it difficult to find cross over opportunities between Dr. Who and the Torchwood spinoff. “It’s interesting that. It’s probably less to be honest because when I used to run Dr. Who and Torchwood then I could sort of spin those things quite easily in my head and talk things over. Now they are two separate production teams and I’m so out of touch with Dr. Who I’m not even sure when it’s on air, because they’ve got these very expensive plans and split seasons and I don’t know what they’re planning for 2012 at all. So it would kind of be difficult now.”

Still he left fans a glimmer of hope that the idea of a crossover could still happen. He confessed, “Then again I could just phone them up and ask them. It’s not impossible but I think you know, we’ve got Torchwood now standing on its own two feet. I think it was always on its own two feet but I think in the public’s eye I think there is a nice separate now and they see it as this big, strong, muscular program. So I’m not in a rush to sort of go back and backtrack or anything. Nonetheless we would always exist in the same happy, lovely created universe. So I think there will be always lots of references to and fro I think. But frankly, who needs that doctor and his [boat]?”