Are Bert and Ernie The Only Asexual Muppets? 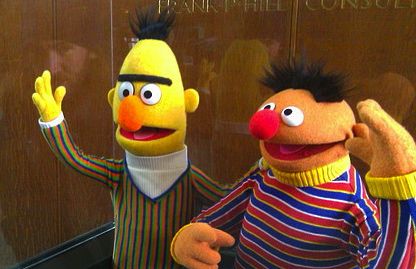 As you may have heard, change.org has started a petition asking the producers of Sesame Street to have Bert and Ernie wed, now that gay marriage is legal in the state of New York.

According to their site, here’s the rationale behind their plea:

In this horrid age of LGBTQ kids taking their own lives and being beaten for who they are, [they] need to know that they're BEAUTIFUL, as Christine's song goes. Bullies that facilitate those tragedies be it verbal or otherwise should be taught that homophobia is NOT okay. Children and parents need to learn that acceptance of humankind, even puppets, would indeed plant a seed of peace that will reverberate throughout the universe. We are not asking that Sesame Street depict anything crude or disrespectful; this is NOT about any other issue other than education. Sesame Street claims Bert and Ernie are only friends, though that's how marriage begins, right?

Personally we’re cool with whatever Ernie and Bert want to do. We respect anyone’s right to marry… or not. No pressure on our account.

But we were a bit surprised by the Sesame Street camp’s response to the request:

"Bert and Ernie are best friends. They were created to teach preschoolers that people can be good friends with those who are very different from themselves… Even though they are identified as male characters and possess many human traits and characteristics (as most Sesame Street Muppets do), they remain puppets, and do not have a sexual orientation."

That’s where they lose us. Are they trying to tell us after all this time that Miss Piggy and Kermit don’t have any sexual orientation? Their whole shtick is based on Miss Piggy trying to get her frog.

What about those Muppets that have five people in their family (and there’s not one of them they’d swap)?  There is a sister and two brothers and a mother and a pop. How’d that happen, huh?

And then, of course, there’s Gonzo. He sure is into all those chickens. So shouldn’t what’s good for the goose be good for the gander, so to speak?

Again we say live and let live. If Ernie and Bert are just two single gentleman sharing a small apartment in the heart of Sesame Street, that’s no skin off our noses. But let’s not start changing the Muppet lore just for the sake of an albeit somewhat ridiculous political argument about felt characters. Until the rules apply to all puppet-kind, it seems like a dark day on Sesame Street to us.