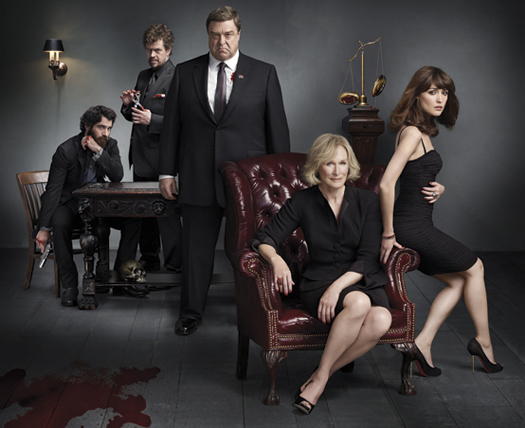 When FX did not renew Damages last season, DirecTV stepped in and saved the show from extinction. Fans were relieved that the series, which follows a high-stakes litigator (Glenn Close) and her protégé (Rose Byrne) through a season-long case, was alive and well and living on satellite TV. Sure, only viewers who subscribe to the service provider can see season four, but those loyal fans are now being rewarded just for watching.

DirecTV has announced the official Damages "Justice is Served" weekly watch-and-win sweepstakes. Simply "Like" the Damages Facebook page to get started. Then pick one of the two weekly prizes you'd like to receive. Each week you can select from laptops to TVs to jewelry and more. Answer a trivia question based on the latest episode and hit submit. One winner for each prize will be chosen from a random drawing. There is a new game every week starting every Wednesday through September 21, 2011.

Once you've entered take a few minutes to peruse the exclusive videos including sneak peaks and episode recaps, behind-the-scenes looks at the set and interviews with Glenn, Rose and new cast member John Goodman.

Damages has featured many notable guest stars in the first three seasons including Ted Danson, William Hurt, Marcia Gay Harden, Martin Short, Zeljko Ivanek and Lily Tomlin. This season they add John Goodman, Chris Messina and Dylan Baker to the roster as they help Glenn and Rose tackle the highly-charged topic of private military contractors in the Middle East.