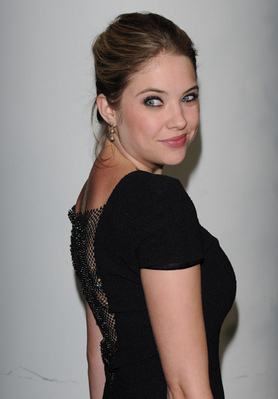 Anyone who watches Pretty Little Liars has been pulling their hair out for a season and a half trying to solve the mystery of A. If you’re not one of them, here’s the gist of it. Four girls in the sleepy town of Rosewood are being tormented by someone who only goes by the initial A. At first they thought it was their missing best friend, Alison, but when she turned up dead they were at a loss.

Ashley Benson plays Hanna Marin, who became the new “it” girl after Alison disappeared. She and her BFFs get random texts and messages from A and are keeping the secret from everyone they know — including Hanna’s divorced parents and her oh-so-dreamy boyfriend Caleb.

At a recent press event Ashley talked about the mid-season finale which airs on Tuesday, August 30. She revealed, “Well the big plot of the episode is my dad is getting married. So he has his wedding and with this wedding comes a lot of other things.”

And, of course, it wouldn’t be an episode of PLL, if the quartet wasn’t getting hassled by A. She confessed, “Me and the four girls are faced with a challenge by A and it’s all individually. So we have certain tasks that we have to complete, which aren’t the best things to do. So we’re trying to figure out how to handle it without destroying our friendships, our family lives, that whole thing.”

Probably needless to say there will also be a super-dramatic ending to Tuesday’s show. Ashley said fans can expect “a huge cliffhanger.”

Not to fear, it will get resolved when the show returns for the second half of the season in January. But the drama will rage on. Ashley acknowledged, ‘You’ve seen us as such a tight knit group and recently we’ve been having our own story lines and we’re not always together all the time, which is really cool. And in season two, the second half, we’re a little bit separated for a bit.”

While she couldn’t go into detail she did admit, “The last episode we’re just, we’re caught in a really bad situation so it just takes off from there. And we have certain things that we have to deal with and us not really getting along doesn’t help much. And all of our family lives are just… they’ll change definitely after this last episode.”

But Ashley pointed out that all the intense problems Hanna faces are making her a better person. She reflected on how her character has changed, ‘This whole situation has made her much stronger. Before when you first saw her in season one, she was just getting over transforming herself into this new person. So I don’t think she was comfortable with herself at that moment and she kept trying to be someone that she’s not.”

She continued, “As soon as this whole A thing came about she had too much to worry about. It was more of let go what you look like and she still cares but she’s more down to earth and she’s more accepting of everybody. And she knows that she only has limited people that she can trust and it’s really made a difference in her and she is a lot stronger. She has a lot of challenges to face and she has family issues as it is. Out of all of the girls, I think she’s progressed the most.”

Watch it all unfold when the Pretty Little Liars mid-season finale airs on Tuesday, August 30 at 8 p.m. EST/7 p.m. Central on ABC Family.

An Interview with the Judges from The Glee Project